"I’d love Huff Post to be the place where the real conversation is happening about who gets to define what it is to be American, and what the real America is" 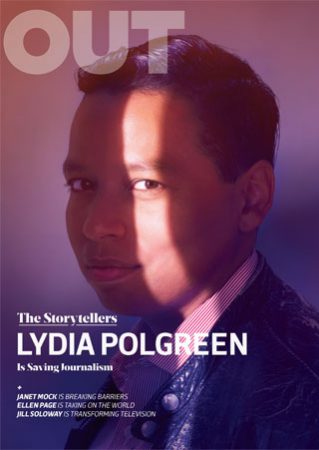 Huffington Post EIC Lydia Polgreen is one of four women chosen for the four different covers created for the Out magazine’s May Storytellers issue. And the profile of Polgreen inside its pages is a testament to how much more rich and complex the media landscape becomes when it incorporates voices and ideas outside of the white, male, straight and connected paradigm. It also shows why it’s important for organizations to acknowledge and support that mission.

Polgreen’s career in media began when she took an unpaid internship, something that turned out to be possible for her only because she took a waitressing job on the side to support it, opening up a path that led eventually to The New York Times.

A friend was interning at Washington Monthly, a small policy magazine in D.C., and offered to get Polgreen in there, too. But the position was unpaid, and Polgreen had no money. “I was completely penniless, and had student loans to pay off, so I was like, There’s just no way I can work for free. But then I thought, Well, maybe I can find a waitressing job at night. And that’s what I did.” The internship led to a poorly paid job, which led, via reporting gigs in Florida and upstate New York, to The New York Times for a trainee program designed for applicants like her “who didn’t have the kind of background or résumé that you would typically have to get hired at the Times.” By this Polgreen means black, queer, and from a family of limited means — all the things that made her atypical at the paper.

Polgreen’s career has taken her not just through different publications, but through different cities and towns across the world. Her coverage reflected a skill for, as former Times colleague Rukmini Callimachi described it, “locating depth in the prosaic and pedestrian,” an idea that applies to the how and why of what Polgreen wants to focus on at Huffington Post. As she tells Out’s Aaron Hicklin, “I’d love Huff Post to be the place where the real conversation is happening about who gets to define what it is to be American, and what the real America is. My goal is to be the place where that conversation is happening.” If it sounds like the kind of boilerplate that many post-election newsrooms have put forth as a response to the results of the 2016 election, the example Polgreen provides is not:

“The fact is that if you’re confronted, face to face, with racial diversity, with queerness, with a person you love with HIV/AIDS, it’s very hard to remain hateful,” she tells me later, when we have left the conference. It’s why the spontaneous crowds that gathered in airports around the country to protest Trump’s Muslim ban in January left her hopeful. “To me that speaks to that exposure argument, because everyone in this country has a story about someone who came here, either fleeing something or seeking a better opportunity. It may be your family, it may be your neighbors, it may be someone in your church, and I think that pulls very strongly against this white-nationalist view that’s coming out of the Steve Bannon world.”

It’s an important piece of context and a complementary idea to Polgreen’s previously stated desire for the publication to seek out ways of “representing the ordinary people anywhere in the world who feel that the game is rigged,” one that seems to imply, and forgive us if we sound too much like a Pollyanna here, the heart of the goal is expanding minds, rather than clicks.