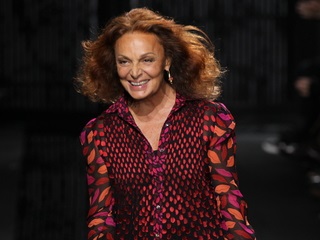 The author of Diane von Furstenberg: A Life Unwrapped, new in bookstores today, is Chicago-based writer Gioia Diliberto. So naturally, it makes sense to highlight some local coverage.

In his review, Chicago Business Journal reporter Lewis Lazare says that Diliberto benefits greatly from the fact that von Furstenberg’s life has never been dull. He also brackets the chronology with a media high and a media low:

Unfortunately, von Furstenberg didn’t have a big second hit to immediately follow the wrap dress. Though she remained a fixture in New York City’s high-powered social whirl, she would reach a very low point in her career when she resorted in the early 1990s to hawking some reasonably-priced creations on QVC.

Diliberto has written several other biographies, as well as a pair of novels. Her latest effort comes on the heels of her subject’s autobiography last fall, titled The Woman I Wanted to Be.