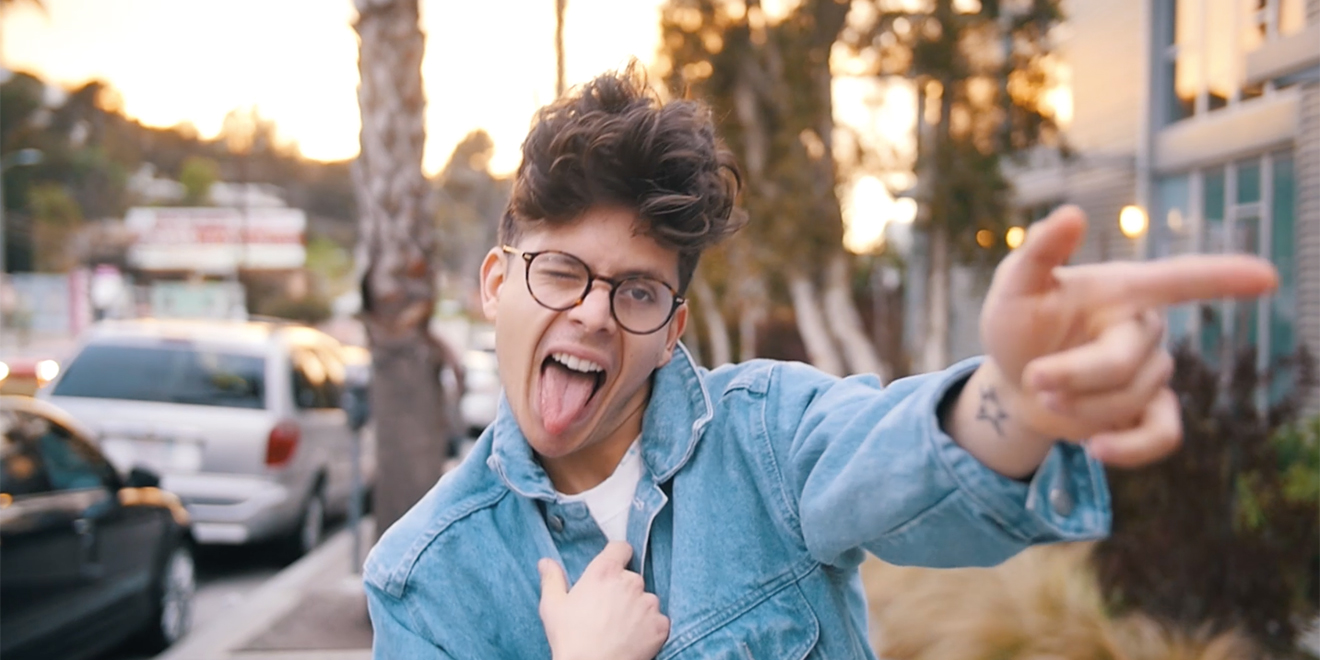 In his video, Rudy Mancuso clowns around L.A. with his gravity-defying hairdo.
FTP Edelman
Share
By Robert Klara
|
March 6, 2017
Share

It’s among the most enduring mysteries of dudedom: Though men can be extremely style-conscious—particularly about their sneakers, cars and gadgets—they do not, for the most part, put stuff in their hair.

According to Euromonitor’s 2014 Personal Appearance Survey, fewer than a third of men use hairstyling products. Though the picture is slowly changing—the number of new beauty and personal care products specifically targeting men increased over 70 percent globally from 2012 to 2014—many guys remain reticent about using hair creams, pastes and gels.

The problem, according to comedian, musician and social-media star Rudy Mancuso, has less to do with stereotype-driven fears that hair goo is a girl thing than with guys simply stalling out over what sort of look to adopt in the first place.

“When it comes to stylistic effects, there has always been apprehension with men,” Mancuso said. “No one wants to appear as if they’re trying really hard to look a certain way. The idea of establishing one’s style can be intimidating.”

Mancuso is in a position to know. His Instagram fan base of 4.2 million followers comes to soak up his humor and antics, but the New Jersey-born 25-year-old, who counts Justin Bieber among his friends, is also known for his coif, a sculptural hillock of hair that has as much personality as he does. And that’s the reason Axe signed up Mancuso, along with 29 other style-conscious and influential dudes, to create a series of “Instagroom” videos to walk young men through the uncharted realm of hairstyling.

“This is the first time male influencers from all different walks of life are coming together to inspire guys to start styling,” said Unilever Haircare vp Piyush Jain, who cited a 2016 survey from Edelman Intelligence revealing that while 65 percent of guys don’t style their hair regularly, 93 percent of those who do report feeling more confident.

Confidence is certainly one theme in this collection of videos—”I always do my hair because I believe that if you look good, you feel good,” declares gamer Joshua Ovenshire—but humor is the order of the day. In his video, Cooking Channel star Josh Elkin, who lets his top patch of hair grow longer than roadside grass, explains how he keeps his hair out of his eggs and bacon in the morning.

“I used to be afraid to let my beautiful, curly manlocks flow,” says comedian Anthony Padilla in his video mocking the melodrama commonly found in beauty-product ads of yore. Thanks to Axe’s Flexible Paste, Padilla is able to live a complete and shame-free millennial life.

For his part, Mancuso, known for challenging social stereotypes by playing a variety of clichéd characters, plays an alter ego named Alejandro Gomez, who’s so preoccupied with his hair that he arranges it while driving. “You know,” he deadpans, “it’s actually scientifically proven that people with dope hairstyles live a longer life.”

Aside from being given Axe product to use, the lads were given the freedom to develop whatever messages they saw fit, according to Jain. “Their Instagrams were [conceived], directed and produced entirely on their own,” he said. “Each creator authentically and comically shared [his] own easy, daily styling routines—and the confidence that comes from it—to encourage their millions of fans to style every day.”

Guy-directed messaging is, of course, not new for Axe. The brand revolutionized the moribund deodorant category in the early 2000s with its colognelike body sprays and the message to young men—delivered most memorably in spots like 2006’s “Billions”—that if they squirted some of this magic potion under their arms, the babes would come running. Axe has turned the volume down on such messages in recent years. For example, a 2014 ad for its its Messy Paste hair product stressed style over conquest (while still featuring a boy-gets-girl theme). Its 2016 “Find Your Magic” campaign was diverse and even inspiring.