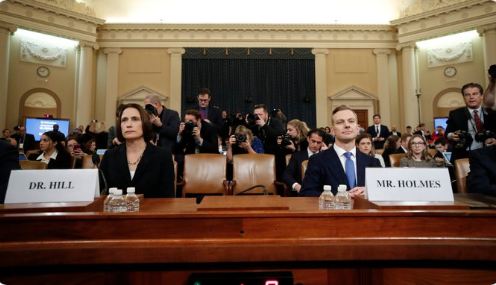 The Nielsen TV data for the 5th and final day (for now) of the televised impeachment hearings is in, and the news is positive.

Altogether, an estimated 11.3 million people tuned in across 8 Nielsen-measured networks which aired live coverage of the hearing from 9 a.m. ET to 11:15 a.m. ET and 1 p.m. ET – 2:15 p.m. ET. That’s according to Nielsen Fast National data.

Viewing data from CNNI and C-Span is not included because those outlets are not Nielsen-rated. The same goes for viewership on streaming.

Thursday’s hearing featured the testimonies of Dr. Fiona Hill,  former senior director for Europe and Russia at the National Security Council, (and a British-born American) as well as David Holmes, a senior diplomat at the US Embassy in Ukraine.

Day 5 is up from day 4 of the hearings. According to Nielsen preliminary data, 8 Nielsen-measured networks delivered a combined average total of 11.22 million viewers on day 4. Again, viewing data from CNNI and C-Span is included because those outlets are not Nielsen-rated. The same goes for viewership on streaming.

According to Nielsen preliminary data, day 3 of the hearings (Tuesday, Nov. 19),  the morning session, which lasted from approximately 9 a.m. – 2 p.m. ET, and the afternoon session (3:30 – 5:45 p.m. ET) attracted an average total of 10.95 million viewers across 8 Nielsen-measured networks.

According to Nielsen Fast National Ratings, day 1 coverage (Wednesday, Nov. 13) attracted an average of 13.79 million total TV viewers across 10 Nielsen-measured networks (HLN was one of the 10, but showed the hearings on tape delay. Common coverage of the ad-supported networks (taking PBS out of the mix) delivered 13.6 million total viewers.

NBC News was the No. 1 network when it came to impeachment hearings coverage among adults 25-54, while Fox News Channel averaged the most total viewers of any network overall.