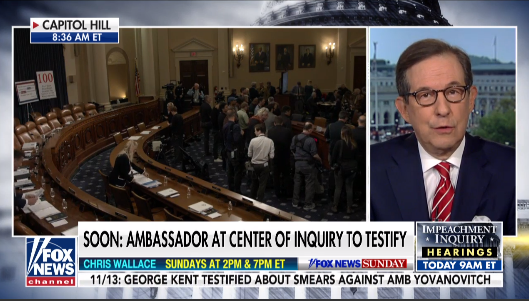 The early Nielsen TV data for day No. 4 of impeachment proceedings is in, and Fox News is again the most-watched network, hauling in an average of 2.51 million total viewers from 9 a.m. – 4 p.m. ET.

The hearing featured the testimony of U.S. ambassador to the European Union (and Pres. Trump appointee/GOP donor) Gordon Sondland.

Fox News has been the most-watched network, across broadcast and cable, all four days of the hearings: Wednesday, Nov. 13, Friday, Nov. 15, Tuesday, Nov. 19, and Wednesday, Nov. 20. It remains to be seen if FNC will average the largest total TV audience for today’s hearing (day 5 – Thursday, Nov. 21).

MSNBC was the 2nd-most watched network for impeachment hearing coverage yesterday, delivering an average of 2.36 million total viewers during the same time period.

CBS was the third-most-watched network across broadcast and cable, and No. 1 in total viewers among the broadcast networks.

Fox News finished in second place in the A25-54 demo on day 3, with CNN, ABC, CBS and MSNBC following in that order.

According to early Nielsen data, on day 4 of the hearings, the 6 Nielsen-measured network averaged a combined total of 11.45 million TV viewers. Again, viewing data from CNNI and C-Span is included because those outlets are not Nielsen-rated. The same goes for viewership on streaming.

So yes, viewership for these impeachment hearings is declining.