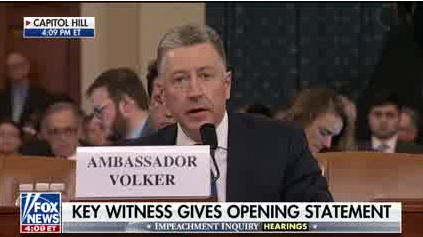 TV ratings for the third day of impeachment proceeds have arrived, and they’re not half bad.

According to preliminary data from Nielsen, the morning session, which lasted from approximately 9 a.m. – 1:45 p.m. ET attracted an average of 11.4 million total TV viewers and 2.25 million A25-54 viewers across 6 Nielsen-measured networks.

Viewership, as one may have guessed, increased in the afternoon session to 13 million total viewers and 2.6 million adults 25-54. The afternoon coverage period was approximately 3:30 p.m. ET to 5:45 p.m.ET.

Again, neither CNNI nor C-Span are included because they are not Nielsen-rated. The same goes for viewership on streaming.

What IS clear is that Fox News was the most-watched network during the morning common coverage, across cable and broadcast. According to preliminary data from Nielsen (and again, this could change later today), Fox News averaged 2.254 million viewers, +4,500 more than MSNBC.

ABC was the top broadcast network in total viewers, while NBC was easily the most-watched network, broadcast or cable, among adults 25-54.

MSNBC pulled ahead in the afternoon session. It was the most-watched network, broadcast or cable, from 3:30 – 5:45 p.m. ET, averaging +20,000 more total viewers than Fox News.

NBC moved ahead of ABC in the afternoon in total viewers, and remained the dominant network among adults 25-54.