-Independent agency Terri & Sandy launched the Strands for Trans “Transphobe Takedowns” campaign, hyper-targeted towards Ted Cruz and Greg Abbott at the Texas GOP convention, which ironically coincided with Pride Month. In 2017, Barba Grooming Salon in NYC introduced Strands for Trans, a movement to create trans-friendly barbershops and salons across the country. Now, in response to the 240-plus anti-trans laws proposed so far this year alone by politicians like Cruz and Abbot, Strands for Trans is calling out these bigoted politicians for their bad hair and their even uglier legislation, thanks to catty digs by pop-culture icon Billy Porter and multi-faceted poet and influencer Lynae Vanee.

-The Craft Lions were handed out at Cannes yesterday, and “The Wish” won for film craft, while a campaign to preserve Ukrainian heritage took the digital craft Grand Prix.

-Head of creative at Greenpeace Nordic, Gustav Martner, has a simple message for the ad industry this week: Stop making ads for products that are fueling climate change.

-LinkedIn CEO Ryan Roslansky said during his keynote address at Cannes Lions, Tuesday, that the professional network backed the creation of the first ever Creative B-to-B Lions, which will be awarded Thursday.

–Rana Reeves, a 2021 Adweek Pride Stars honoree, is on a mission to help brands implement diversity and inclusion in their creative that truly represents what the world looks like.

-Cultural creators studio and production agency Young Hero is launching a new platform, Hype&Seek, to help brands create product giveaway promotions in the metaverse. The new platform will go live this summer in Decentraland (DCL) and will eventually expand onto other platforms. Young Hero will also create digital campaigns that promote the locations of NFTs throughout the DCL map. Brands will use Hype&Seek to create hunts for specially designed NFTs dropped throughout a metaverse platform. Users who find the token can then redeem them to claim the product at a real-life store, and—eventually— shipped directly to them. The first phase of Hype&Seek is expected to include NFTs from Lobos 1707 Tequila. 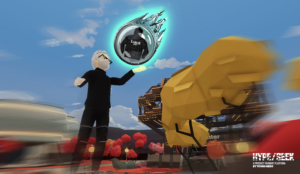