NEXT:Evening Newscasts Head to El Paso, Site of Saturday's Domestic Terror Attack
PREVIOUS:Shep Smith: 'Yet Again in America We Search Our Souls For Answers, Beg Our Leaders For Solutions That Thus Far Have Not Come'

CNN Newsroom apparently reached out 50 Republican lawmakers in hopes that they would come on the program to discuss the attacks in El Paso and Dayton that took place over the weekend.

According to co-anchor Jim Sciutto, only one of those 50 accepted an interview request.

The interview would focus on the potential for gun reform in light of the attacks.

“We asked 50 GOP lawmakers. 50, just to come on the air and talk about the issue,” said Sciutto, reporting from El Paso. “One said ‘yes,’ and we’ll be speaking to him later.”

Sciutto added: “Forget about votes, they don’t even want to talk about it in public.”

The broadcast then took the unusual step of running the names of those 49 lawmakers who declined to appear. 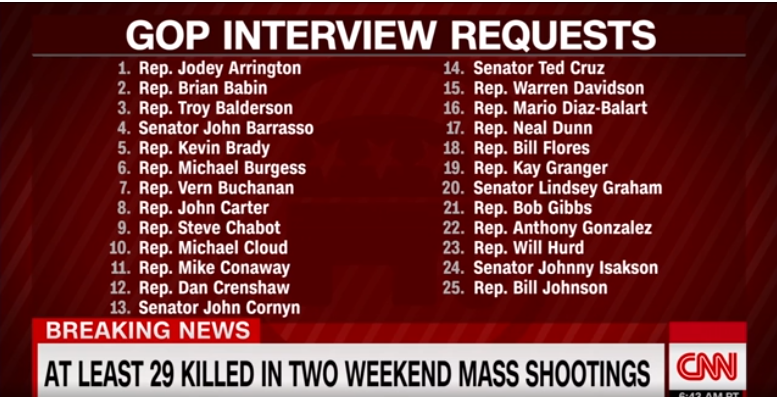 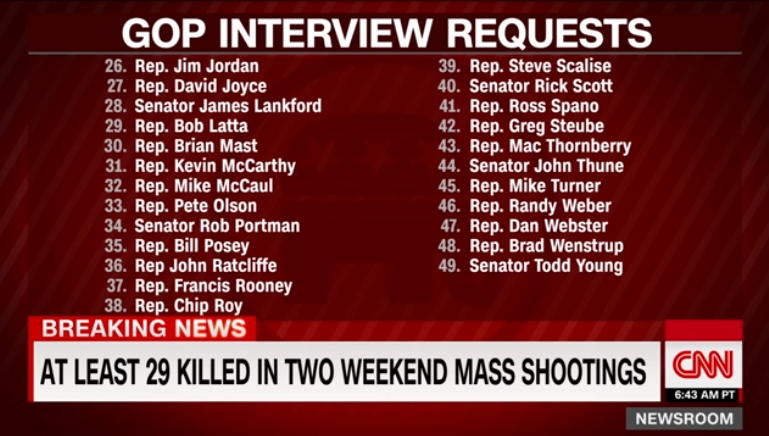 According to Sciutto, Florida congressman Ted Yoho was the only GOP lawmaker to accept the invite, and the anchor made a point of giving him credit for doing so.

“I want to give credit where credit is due here,” said Sciutto. “This broadcast reached out to 50 Republican lawmakers to speak about this issue today. 49 of them said, ‘no.’ Ted Yoho, a member of the House Freedom Caucus he said, ‘yes.'”

Scuitto added: “Congressman: We appreciate you coming on this morning.”

Rep. Yoho responded, “Thanks for having me on, Jim. It’s an important topic we need to talk about as a nation.”

This is not the first time a CNN program has publicly called out Republican lawmakers for declining to appear on their programming.

CNN State of the Union host Jake Tapper called out GOP lawmakers who declined requests to be interviewed for yesterday’s broadcast.

.@jaketapper calls out Republican leaders who declined to appear on #CNNSOTU following two mass shootings in Texas and Ohio. pic.twitter.com/TeZZHHK0Mn 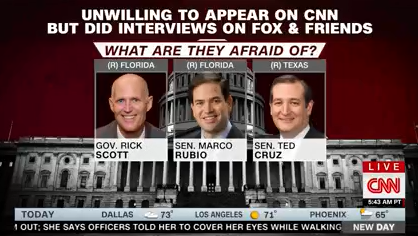 However, Gov. Scott would appear on CNN that evening, and Sen. Rubio would go on to do a Parkland-focused CNN Town Hall roughly a week later.

Sen. Cruz tweeted that he had spoken with CNN the previous day:

That’s funny, I spoke to CNN for 15 mins yesterday about proactive solutions to prevent gun violence (like passing the Grassley-Cruz bill—which Dems filibustered—that would add $300 million for school safety) yet CNN has aired NONE of it. Why not air the (entire) interview? https://t.co/c4GZcqTbs7

Here’s a pic of the @CNN interview — a 15-min exclusive given yesterday — that y’all still haven’t aired… (While falsely claiming I’m “afraid” to talk to CNN.) https://t.co/Bo8AzsuGFX pic.twitter.com/sEtt4bTeUT