NEXT:Therapy For School Shooting Survivors: Talking About It On TV
PREVIOUS:Oprah Winfrey Tells 60 Minutes Overtime She's Not Going to Run for President in 2020 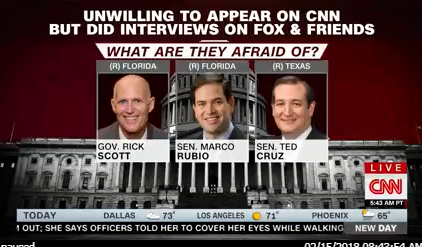 Gov. Rick Scott (R-Fla), Sen. Marco Rubio (R-Fla), and Sen. Ted Cruz (R-Tex) all appeared on Fox & Friends this morning following the horrific shooting at Stoneman Douglas High School in Parkland, Fla. that claimed the lives of 17 people, the worst mass shooting in a school since 26 people were killed at Sandy Hook Elementary School in Connecticut in 2012. 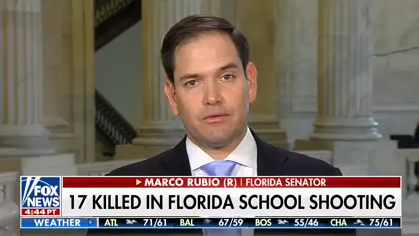 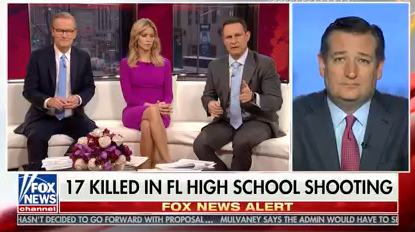 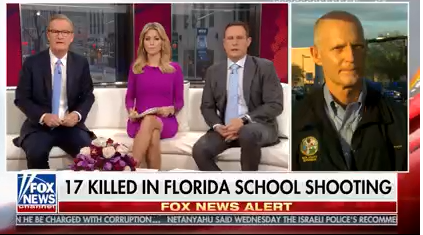 Yet each of the three Republican lawmakers decided not to go on CNN’s New Day, and co-anchor Chris Cuomo was quite frustrated about that.

“Rubio says this is an inexplicable tragedy. That couldn’t be less true,” said Cuomo. “Governor Scott is actively fighting right now to penalize doctors who even ask patients in their state if they have firearms. Where are they? They won’t come on here. They’re on Fox News this morning, the mother ship, so they won’t be pressed about gun control. What are they afraid of?”

Cuomo then welcomed former Florida Republican congressman David Jolly to the program. Jolly joined from the passenger seat of a car, via Skype.

CUOMO: None of them would come on this morning. You would, because you’re on the right side of this argument, but they’re all on Fox, the mother ship because they don’t want to be asked about this. What are they afraid of? Tell me.

JOLLY:Because they’re weak-kneed ideologues. I hate people who say, ‘I’m a hunter, I like to own guns.’ They don’t have the courage to stand in front of the American people and admit they don’t have solutions to these issues and they’re hiding from the American people on it. They’re weak-kneed ideologues. Last year they tried to pass guns on campuses, kids could walk into a classroom, lay their gun on their desk. fortunately that got killed. Those are the politics of the Republican party. I’m a Republican and I wish Republicans would address universal background checks, responsible gun control measures. They’re not doing it…

After his interview with Jolly was complete, Cuomo said, “Governor Scott, We know you’re a fighter. We know you believe passionately. Senator Rubio, same thing. Senator Cruz, it’s your hallmark, you’re the great debater. Why won’t you answer the questions that need to be answered? Why won’t you discuss how we stop the school shootings? It’s a simple question. people should insist you answer it. Alisyn, back to you, please, in Parkland, Florida, where everybody’s head and heart should be this morning.” 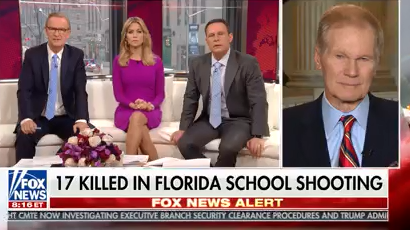 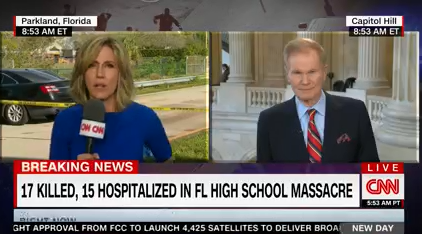 Below is video of Cruz’s appearance on Fox & Friends: