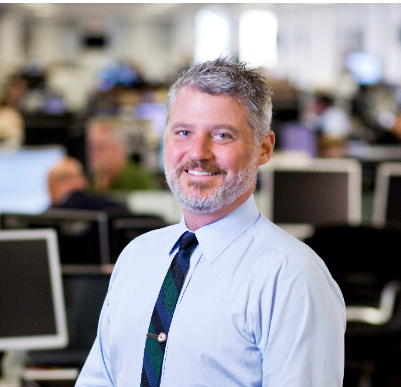 Vice Media president of global news and entertainment Jesse Angelo sat down with THR recently to discuss his first few months at the company (he joined in June), and what we can expect from Vice Media’s cable channel Viceland in 2020.

The Vice deal with HBO came to an end this past fall. Its Emmy and Peabody award-winning nightly newscast Vice News Tonight on HBO (which launched in Oct. 2016) is moving to Viceland early next year. Vice, the long-running weekly investigative series on HBO, is heading to Showtime, and the company recently launched a docuseries on Hulu.

A number of high-profile Vice Newsers have departed the company since Angelo’s arrival. In addition to the departure of Vice’s executive vice president of news Josh Tyrangiel, the executive in charge of Vice News Tonight on HBO Madeleine Haeringer returned to NBC News last month to run the network’s new partnership with Quibi. Vice News Washington bureau chief and correspondent Shawna Thomas left to go to Quibi to serve as a content executive, where she’ll most certainly be working with Haeringer.

Point being, there has been a lot of change at Vice in recent months. It will be interesting to see what Angelo and the news team will do going forward.

On whether we’ll see more news and politics on the younger-skewing cable network that is Viceland, the former chief executive and publisher of the New York Post told THR’s Jeremy Barr:

Yes. You will see more and more news and information programming on Viceland through the year. It will be an evolution, not a revolution. Vice News Tonight, coming early in the new year, will be the big stake in the ground.

There’s the notion that millennials and Gen Z aren’t particularly interested in watching the news on a nightly basis. Angelo was asked whether Vice research indicated that Viceland’s younger audience base actually wants news, as opposed to the entertainment programming that had defined the cable channel. His response:

Yes. We dispel the myth over and over that the youth aren’t interested in news. What our research shows is: When it comes to Gen Z, they believe that they are activists and that saving the world and changing the world and making the world better is their personal duty. And they take it incredibly seriously. We want to make sure we’re giving them the tools and information they need to do that.

On how Viceland’s news programming will compare with other cable news fare, specifically CNN:

What we see, in both our research and audience numbers for the other cable channels, you are at this moment — certainly in America and I think around the world — of upheaval, where there are a lot of people who are completely rejecting the system. They see partisan advocacy journalism and partisan advocacy talking heads as part of a corrupt system that they wish to throw away. There is this moment where people are saying the system is broken, and they see places like CNN as part of that system, and they see us as authentic and honest and very much not part of that system.

UPDATE: While many high-profile Vice Newsers have left in recent months, the company made two additions recently and promoted a number of veteran staffers:

Paola Ramos recently joined Vice, and is reporting for platforms across the news division including for the upcoming weekly Vice on Showtime, and Vice News Tonight on Viceland. Ramos had previously written for Vice.com and hosted the GLAAD-nominated VICE digital video series ​Latin-X ​. She is a regular contributor on the Telemundo Network and MSNBC.

In addition to Ramos, Michael Anthony Adams joined Vice News as a correspondent/producer. Adams most recently worked at ABC10 in Sacramento, where he was a member of their Special Projects Unit tasked with developing short- and long-form immersive content for new audiences. Prior to this, he was a breaking news and crime reporter at the Indianapolis Star for 3 years.