NEXT:NBC Announces Launch of NBC News Studios, a New Unit to Produce Content for Peacock and Quibi
PREVIOUS:Jim Lehrer Has Died at Age 85 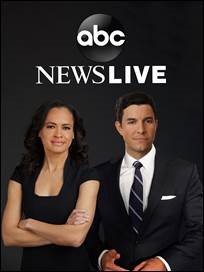 It seems like NBC and CBS have garnered the majority of attention as of late when it comes to news about streaming news. However, ABC has a streaming news property of its own that the company is putting a lot of effort and resources into this year.

Both Llamas and Davis will continue in their broadcast roles, reporting from the field and delivering interviews for all ABC News programs.

“In 2020 we have the rare opportunity to create what a perfect 24/7 news channel looks like – breaking news, live events and documentary storytelling all in one place,” said ABC News Live senior Justin Dial, who joined ABC in Nov. 2019 after a run as a producer on Vice News Tonight. “I’m thrilled ABC News Live will have Linsey Davis and Tom Llamas to lead the charge. They are both terrific journalists with top-notch experience doing live interviews and reporting from the field, which is where we want to see them, too, not just behind a desk.”

Beginning Monday, Feb. 10, on the eve of the New Hampshire primary, Davis will anchor a brand new prime time newscast weeknights at 7 p.m. ET and a second hour each night at 9 p.m. ET.

“Longform reporting and the opportunity to ask all of the important questions in interviews are by far my favorite part of the job and I’m excited to do even more of that on ABC News Live,” said Davis. “Our prime time show will feature in-depth storytelling and diverse reporting and I’m excited to have two hours each weeknight to spend more time diving deeper into these stories.”

A former WNBC anchor, Llamas has been the anchor of ABC both World News Tonight’s weekend editions since 2017 and led interviews with First Lady Melania Trump, Ukrainian President Volodymyr Zelensky, Venezuelan President Nicolas Maduro. This week Llamas is anchoring ABC News Live’s coverage of the Senate Impeachment Trial, and he will be live in Manchester, N.H., for the ABC News Debate on Friday, Feb. 7 and the New Hampshire primary on Tuesday, February 11.

“Streaming is the next frontier in broadcast journalism and we’re entering this new era full-speed with the global resources and incredible journalists that make up ABC News. Viewers expect news on demand, especially breaking news, and ABC News Live will be there for them,” said Llamas.

Plus, ABC News Live will feature multiple original documentaries throughout the year. Guardians of the Amazon from the Nightline team will debut in late February. Anchor Dan Harris and ABC News gained rare access to an indigenous tribe, the Guajajara, who have taken up arms against the loggers deep in the Brazilian jungle to bring their illegal operation to a halt, by any means necessary.