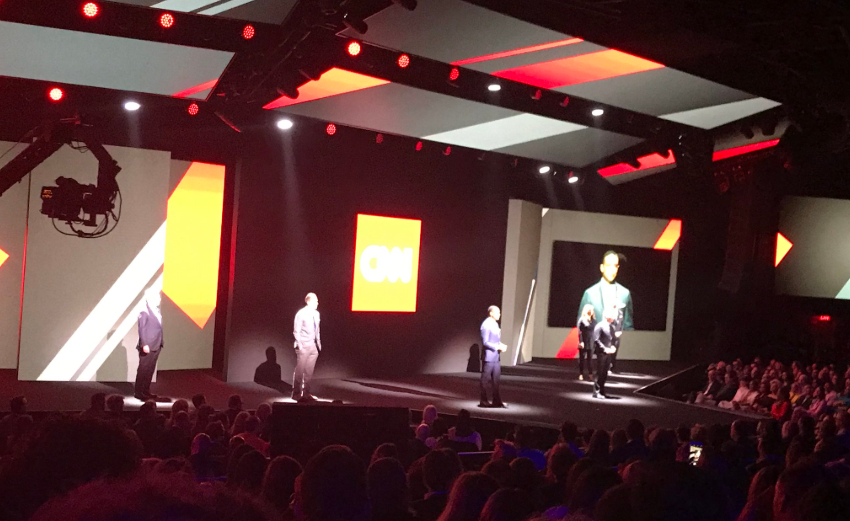 This morning was WarnerMedia’s time to shine at upfront week. The top news coming out of the new company’s upfront may have been TBS’ foray into drama, a notable move after the company had spent a decade developing TBS into a full-fledged comedy brand.

CNN scored some time on the Hulu Theater as MSG stage to report the news about its network as well.

Several top CNNers on stage talking about the importance of truth. pic.twitter.com/sMmFjRKo1b

Adweek’s Jason Lynch is on-site and reports that the CNN portion of the upfront started off with a clip reel with montage of instances where the White House has restricted CNN’s press access.

You’ll recall the network’s chief White House correspondent Jim Acosta had his press pass suspended for 14 days last November, only to have it restored after other outlets spoke out in support of the TV newser and a judge ruled in his favor.

Last July, Acosta’s colleague Kaitlan Collins was disallowed from covering an open press event at the Rose Garden. The White House press office said at the time she was not allowed to cover the event—featuring Jean-Claude Juncker, the president of the European Commission—because she shouted “inappropriate” questions at the President Trump during an Oval Office photo op earlier in the day. Once again, other outlets spoke out in support of Collins.

After the reel ended, all the big names appeared on stage to a rousing ovation from the buyers and advertisers in the audience: Wolf Blitzer, Chris Cuomo, Anderson Cooper, Erin Burnett, Don Lemon, and Jake Tapper.

The overarching theme of their segment was “truth.”

Blitzer kicked things off: “The truth. It matters, and it never takes a side. For nearly 40 years, CNN has relied on the truth to tell the stories the world needs to hear.”

Cuomo added: “Getting to the truth in the times we’re living in today isn’t always easy. It takes courage, an obsession with facts and a willingness to hold those in power accountable, even when it’s uncomfortable.”

Tapper: “The truth matters whether you lived in New Orleans during [Hurricane] Katrina, or you live in Puerto Rico today. The truth matters in the White House, and on Capitol Hill. Our job, in fact our responsibility is to seek out the truth and find answers.”

Burnett: “The search for the truth has no borders… CNN has a commitment to ‘go there,’ philosophically and geographically like no other news organization in the world.”

Lemon: “It’s not a matter of ‘left’ or ‘right,’ but a matter of fact. It’s only with the facts that we can get to the truth. It has always been the critical role of journalists to seek it out, and since the earliest days of the printing press, people like us have been doing just that.”

Cooper concluded the segment: “Today, at CNN we will stop at nothing to ensure our ability to do so and protect it and allow it to flourish. We are living in truly extraordinary times…” before he was seemingly cut off by the legendary “This is CNN” James Earl Jones voiceover.