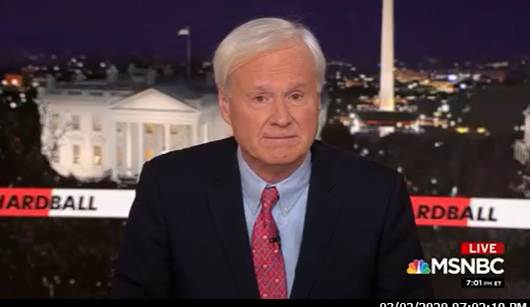 Chris Matthews announced at the top of 7 p.m. hour that he is retiring from MSNBC, effective immediately. “Let me start with my headline tonight,” Matthews began. “I’m retiring. This is the last Hardball on MSNBC, and obviously this isn’t for lack of interest in politics. As you can tell I have loved every minute of my 20 years as host of Hardball.” Matthews continued for a few more minutes, then went to commercial break, and didn’t return. Here’s his sign off:

Every morning I read the papers, I’m gung ho to get to work. Not many people have had this privilege. I love working with the producers and discussions we’ve had over how to report the news, and I love having the connection with you the good people who watch. I’ve learned who you are, bumping into you on the sidewalk or waiting in an airport and saying hello. You’re like me. I hear from your kids and grandchildren. ‘My dad loves you, my grandmother loves you. We watched it till the end.’

After my conversation with MSNBC, I decided tonight will be my last Hardball. I’ll tell you why: The younger generations are ready to take the reins. We see them in politics, the media, they have proven in the workplace. They grew up with better standards, fair standards. Compliments on a woman’s appearance, some men, including me, might have once incorrectly thought were okay were never okay. Certainly not today. For making such comments in the past, I’m sorry.

I’m very proud of the work I’ve done here. Long before I went on television, I worked for years in politics, was a newspaper columnist and author. I’m working on another book. I’ll continue to write and talk about politics and cheer on my producers and crew here in Washington and New York and my MSNBC colleagues. They will continue to produce great journalism in the years ahead. For those who have gotten in the habit of watching Hardball every night, I hope you’re going to miss me because I’ll miss you.

So let’s not say goodbye, but ’til we meet again.

Steve Kornacki, who regularly fills in for Matthews, picked up right after the commercial break:

That was a lot to take in just now, I’m sure, and I’m sure you’re still absorbing that and I am, too.

Hardball was MSNBC’s longest-running show. It debuted on MSNBC in 1999, but actually premiered on CNBC in 1997. (Matthews’ association with NBC goes back even further to 1994 when he hosted a politics show on America’s Talking.)

A source told TVNewser that Matthews planned to retire sooner rather than later, but the negative headlines that had been swirling around the longtime cable newser most certainly expedited retirement talks with network executives.

Last week, former MSNBC guest Laura Bassett wrote a column for GQ, outlining a number of instances where Matthews “inappropriately flirted with her” before she appeared on the Hardball panel. She acknowledged that his actions might not fall into the realm of sexual harassment, but that they had still made her feel uncomfortable, affecting her ability to do her job, and that she was not the only woman left feeling this way.

The column was published just days after Matthews told viewers during live coverage of the Nevada caucuses that if Sen. Bernie Sanders of Vermont became the Democratic nominee, Republicans would release oppo research about “what [Sanders] said in the past about world affairs, how far left he is” that would “kill him” in the general election.

The now-former Hardball host later issued a sincere on-air apology for the comments.

Then, there was that vulgar joke about Hillary Clinton which got him in hot water: “Where’s that Bill Cosby pill I brought with me?”

Additionally, there was the report that NBC News had settled a sexual harassment complaint against the host back in 1999.

But there were many bright moments on Hardball as well. This past November, Matthews celebrated 20 years of the famed political talk program.

Among those who offered their congratulations and best wishes to Matthews on the milestone were actor Woody Harrelson and former President Jimmy Carter. Matthews most certainly attracted a wide variety of Americans every weeknight at 7 p.m. ET on MSNBC.

So, who, dear TVNewser reader, do you think will be the next permanent host of MSNBC’s 7 p.m. hour? Tell us.