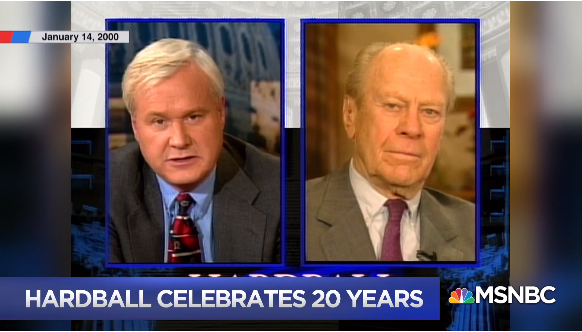 Tonight, Chris Matthews is celebrating 20 years of Hardball on MSNBC, making it the longest-running program on the network.

And a kind message from CBS Evening News anchor Norah O’Donnell, who was at CNBC with Matthews almost 20 years ago when Hardball launched: “Thank you for your friendship, thank you for all the tips, and congratulations. So well deserved.”

Oh hi there, @NicolleDWallace and Brian Williams! Thank for the shout-out on #Hardball20! pic.twitter.com/MIgN5Ay7dE

Earlier in the week, the longtime MSNBC newser received congratulations messages from Bill Maher, “I’m honored to call you a friend, and there’s no one I’d rather get talked over in a three-second satellite lag,” he quipped.

Here are his colleagues at NBC News including Lester Holt, Andrea Mitchell and Kristen Welker,

And some kind words from various D.C. lawmakers who have appeared on the program over the years: A trio of Democratic senators from New England, Sen. Chris Murphy (CT), Sen. Sheldon Whitehouse (RI), and Sen. Ed Markey (MA), as well as Rep. Karen Bass (D-CA).

Here’s a separate message from Pres. Carter and Rosalynn Carter.

Brzezinski has often said Hardball is one of her favorite shows. “I love the open,” she added earlier this week. “I’m obsessed!”

Also, Hardball also has a #Hardball20Sweepstakes where followers of the show have a chance to win exclusive gear from the show. Winners will be announced on tonight’s broadcast by Matthews.