Burger King is an advertising powerhouse whose “Moldy Whopper” delighted awards show judges and fans of ads made for people who make ads. And that’s just one of the examples of the kind of high-profile and critically lauded campaigns the fast-food brand has put out in recent years.

Known as a brand that is not afraid to take risks, it was perhaps inevitable that a campaign would come around that missed the mark. The latest, from MullenLowe, does that in an unexpected way, leading to accusations that the work is in poor taste and insensitive to the economic difficulties businesses face in the current climate and in economically depressed areas.

The “Scary Places” campaign calls on customers to drive to a variety of dilapidated, abandoned fast-food restaurants and use Burger King’s mobile app to get a coupon for a free Whopper. Copy running alongside images of these restaurants—located in cities such as Dayton, Ohio, and Birmingham, Ala.—seemingly suggests they failed because they didn’t flame-grill. 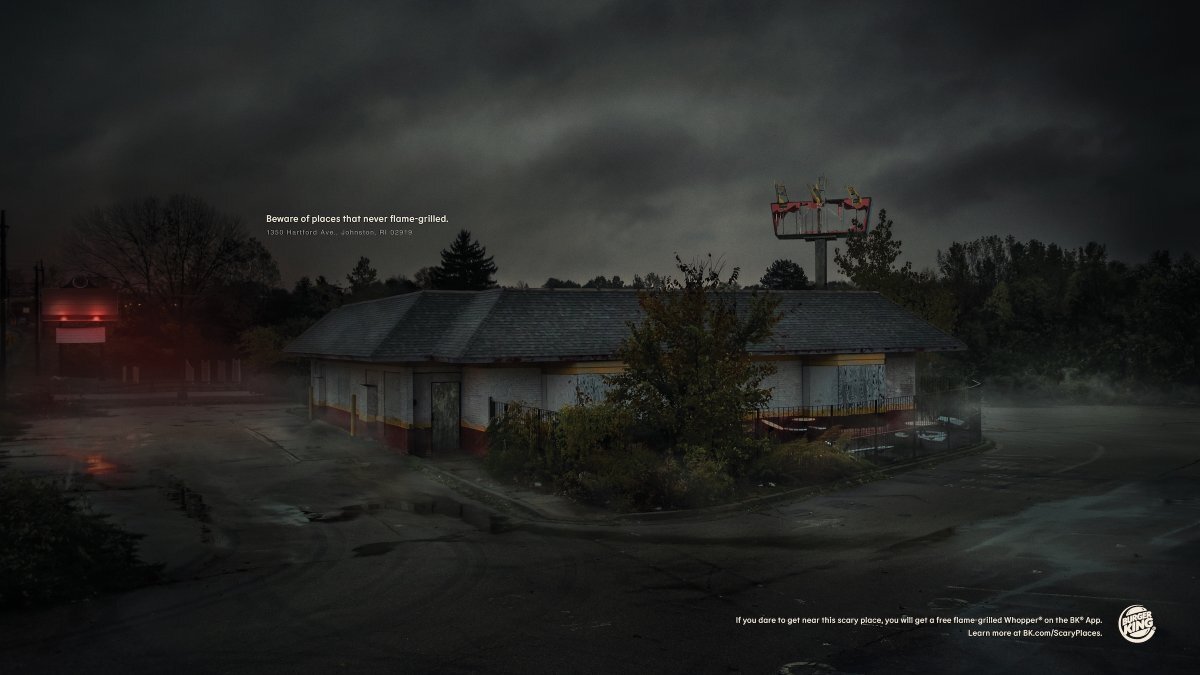 MullenLowe has worked for Burger King for around three years, acts as its lead social media agency and worked on the social media campaign for the Cannes Direct Grand Prix-winning “Whopper Detour,” as well as on last year’s “Real Meals” for Mental Health Awareness month and “Ring King” delivery stunt.

Burger King has long built up its brand reputation around trolling, with a series of campaigns targeting category leader McDonald’s. To a certain extent, the latest campaign is an extension of that approach. Criticisms of the “Scary Places” campaign argue that such trolling tips over to mean-spirited or insensitive.

Adweek’s very own David Griner sparked a heated discussion of the effort via a tweet taking issue with the campaign, which sparked a series of critical responses from others around the industry.

I appreciate provocative advertising but have to say I don’t love Burger King’s ‘Scary Places’ campaign about abandoned competitor locations in real communities.

These businesses didn’t fail because they sucked. They failed because of economic hardship in cities like my own. pic.twitter.com/5ggGdhsr3R

Such responses included a number of people calling the effort “tone deaf” and others citing its lack of empathy. Some pointed out that certain images were in areas which had experienced economic hardship well before the pandemic, such as a section of Dayton which was hit by a hurricane in 2019.

Couldn’t agree more. Dayton is my hometown — and in addition to struggling economically for years + years prior, the area featured in the campaign was absolutely ravaged by an EF4 tornado in May of 2019.

Not a fan of this move by BK.

This makes me really sad. Seems like an unnecessary dig in dark times. Surprised at this…

Multiple commenters also suggested the approach hinted at a lack of diversity among the creative team behind it.

Burger King CMO Fernando Machado also responded to the tweet, pointing out that the closures preceded the pandemic and claiming the objective of the effort was not to make light of economic hardships.

Hi there, reality is that many (all) of these places were closed before the pandemic. The objective here is definitely not make fun of hardships. Actually, most fast food brands are doing well and growing this year. But I see your point.

Asked by Adweek about the response to the campaign, Machado claimed the criticism was mostly relegated to this particular thread on Twitter and it does seem to be where the majority of the discussion of the campaign has been focused. MullenLowe deferred to the client for comment.

“In the real world most people actually got that the campaign is just something poking fun of competitors, that’s just Burger King being Burger King,” Machado said via email, while also pointing to a 2017 print campaign from David showing Burger King locations on fire. “That’s the type of humor of the brand. And most people actually seem to get it. Surely the intent was not to offend anyone or to take lightly the hardships that some areas are going through.”

He clarified that Burger King tracks social sentiment, explained that the campaign was limited geographically to the areas where the promotions were offered (and thus not presented to a wider national audience) and said that while he deeply respects Griner’s views, so far most of the criticism of the campaign seems to stem from the one Twitter thread.

Machado also posted about the campaign from his own account today, calling it “Fun stuff.”

A quote retweet to his post (which also received 16 likes and three retweets) suggested that the aforementioned thread at least wasn’t the sole place where the work has faced criticism.

This is not a good campaign. No matter the ‘underlying’ justification.

The perception of your target audience is more important than an idea crafted by high-level marketing execs + ad agency. https://t.co/SfU7QrVQCA

“We always try to do something fun for Halloween. Our brand is a fun brand which loves a good prank,” Machado told AgecnySpy, adding that the brand’s fans enjoy when it pokes fun at competitors, with this campaign attempting to do a little of both. “It aims to be tongue-in-cheek and play with closed locations portraying them as haunted places.”

“We respect people’s opinions. And we always listen to feedback. But we also have conviction behind the work we do,” he said. “If we were to shy away from doing things that we believe in because some criticized us in social media we would probably not have done Whopper Detour, Moldy Whopper, Cow’s Menu, Burning Stores, Google Home of the Whopper, among so many other ideas which helped build our brand and our business.”