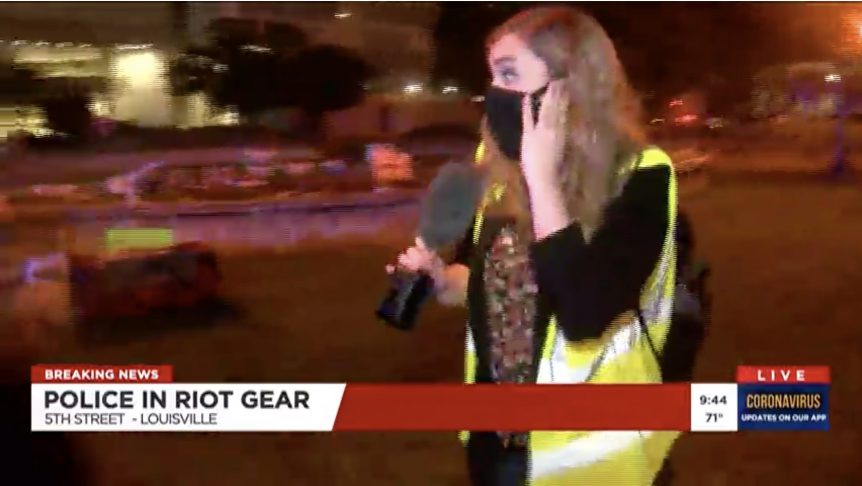 She made headlines around the world when a police officer shot pepper balls at her during a live shot.

Now, WAVE reporter Kaitlin Rust is telling her side of the story.

Rust penned an essay on the Louisville, Ky., station’s website.

We’ve included the entire letter below, which includes details on why she was hit and how she’s committed to continuing coverage.

As a journalist, you never want to be the story. It makes my stomach turn to see so many other journalists experiencing much worse and much greater physical harm for simply doing their jobs.

Journalists are trying to show you what you need to see, what is happening in your city and in your country. It is our First Amendment right. Many countries still fight for that right; many journalists are still silenced. We are fortunate enough to be protected by our Constitution, but we are still being targeted by the people who swore to protect it.

I know so many of you have seen the video, because it’s shocking to see something like that play out on live TV.

I was instructed to move while live on air and I was complying, but I was still shot at with pepper balls. I was communicating what I was doing with the anchors, audience and officers. I thought I was at a safe distance, in the area where I was instructed to go, and did not hear any further instruction before being fired on with pepper balls. I’m lucky only one struck me in the shin, leaving a welt and bruise.

A recent statement made by LMPD when asked about the investigation included an explanation why reporters might get hit in the field. I’m certain they aren’t talking about me. Sure, there are reporters getting caught in the wrong place and unintentionally getting hit in the crossfire, but they’re not complaining. I was not caught in a crowd.

I realized what shook me the most is that, for my entire life, I’ve been taught it isn’t supposed to work this way. As long as we follow the law, police officers will keep us safe. I know and trust many good people who wear the badge. However, when I saw a police officer look me in the eyes and intentionally hurt me—for no reason, and without fear of any consequences—it shook me hard and gave me better understanding.

This is what the protests are all about.

The betrayal I felt for just one second is a mere fraction of what many people live with their entire lives. It was a terrible and empty feeling, and the Black community around me feel it far more deeply than I ever will.

This experience has made me more committed than ever to tell that story. Like all journalists, I’ll keep giving a voice to anyone who’s demanding justice, and to those who are trying to help them. We’ll keep shining a light on all parts of that struggle, even if powerful people prefer the dark.

Rust was hit during a protest last Friday night. As she described in her note, she was not hurt.