NEXT:Gayle King: 'Our Competitors Will Say [to Me] I Really Like What You Guys Are Doing; They Shall Remain Nameless, But They Are Well Known'
PREVIOUS:Jan. 2020 Ratings: Fox News Has Highest-Rated Month Since Nov. 2016 Presidential Election 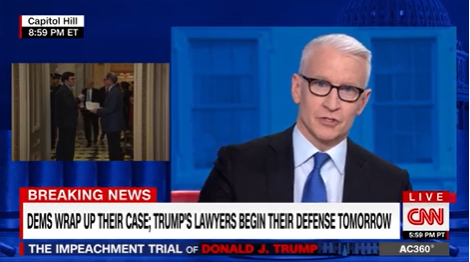 CNN started 2020 similar to how it ended 2019: As one of the 10-most-watched networks on basic cable.  Not only did CNN cement its status as one of the top basic cable networks, it also posted its best January ratings ever for the Monday-Friday prime time interval, averaging 1.12 million total viewers. The network’s solid ratings performance on weeknights was aided significantly by a presidential primary debate in the middle of the month, –which drew 7.3 million total TV viewers – to go with multiple nights of Senate impeachment trial coverage.

Despite posting a record weeknight prime time audience, CNN was -2% in total Monday-Sunday prime time viewers, -8% in total day viewers, -11% in the prime time demo and -18% in the total day demo compared with Jan. 2019.

On the programming front –  The Lead with Jake Tapper out-performed MSNBC’s Deadline: White House with Nicolle Wallace among adults 25-54 for the second straight month.

The Situation Room with Wolf Blitzer outperformed MSNBC’s MTP Daily (5 p.m.) and The Beat With Ari Melber (6 p.m.) in Adults 25-54 in January.

However, these key CNN programs failed to beat any of the above-mentioned MSNBC programs in Total Viewers.

And lastly, Cuomo Prime Time remained CNN’s No. 1 program, both in Total Viewers and in the key A25-54 demo.

All of CNN’s dayside programs also outperformed MSNBC in January, posting higher demo 25-54 audiences including:  CNN Newsroom with Poppy Harlow and Jim Sciutto (9am and 10am), At This Hour with Kate Bolduan (11am), Inside Politics with John King (weekday, noon), CNN Right Now with Brianna Keilar (1pm) and CNN Newsroom with Brooke Baldwin (2pm and 3pm).  CNN’s morning programs Early Start with Christine Romans and Laura Jarrett (4-6am) topped MSNBC in the demo 25-54 and CNN’s New Day with Alisyn Camerota and John Berman (6-9am), registered its third-highest January on record among total viewers (538k, behind 2018 and 2019).

On Saturdays, Smerconish, CNN Newsroom with Fredricka Whitfield (11-3pm), CNN Newsroom with Ana Cabrera (3-6pm and 7-9pm) and S.E. Cupp Unfiltered all ranked #2 in cable news in the demo 25-54.  New Day Sat/Sun with Christi Paul and Victor Blackwell topped MSNBC in both total viewers and the demo adults 25-54 this month.

On Sunday mornings, all of CNN’s public affairs programs including Inside Politics with John King (8am), State of the Union with Jake Tapper (9am and noon), Fareed Zakaria GPS (10 am and 1pm) ranked #2 in cable news in their respective time periods, easily beating MSNBC in the 25-54 demo.  Reliable Sources with Brian Stelter (11am) also topped MSNBC in the key demo 25-54. CNN Newsroom with Fredricka Whitfield (2-5pm) ranked either #1 or #2 among total viewers and/or the demo this month.  CNN Newsroom with Ana Cabrera  and other CNN special programming topped MSNBC on Sundays in the demo this month (5-8pm).

Note that Comscore Xmedia data is delivered on a delayed schedule and therefore the above reflects Jan-Nov 2019.