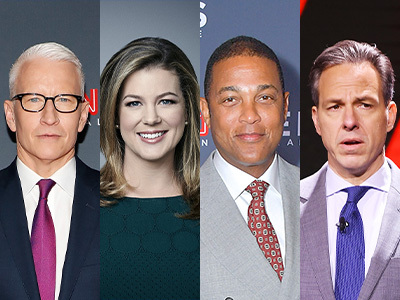 CNN fired Chris Cuomo over the weekend, and now the network has to come up with his replacement in the weekday 9 p.m. hour—arguably the most important timeslot in cable news.

CNN Worldwide president Jeff Zucker reportedly addressed Cuomo’s exit during a call with staff Monday, adding that the network hasn’t decided on how it will fill the hour, “beyond this week, and we’ll begin to think about that soon.”

So with that in mind, will the network go the 7 p.m. Fox News route and install a rotation of 9 p.m. guest hosts for the foreseeable future? It’s possible (and could make sense) that CNN goes with rotating hosts until the WarnerMedia-Discovery merger is finalized (which execs predict will happen in mid-2022) and then make a decision on a permanent host when its new owners take over. While Fox News has had ratings success with rotating hosts for nearly a year, I’m not entirely convinced that CNN has the type of bench where it could make the rotating host format work similarly for the long-term.

What are some other options? Anderson Cooper 360 aired from 8-10 p.m. ET before the 2018 launch of Cuomo Primetime. It’s possible that the network could return to two-hours of AC360 permanently, but I wouldn’t necessarily bet on it.

CNN weekend host and longtime political talk radio personality Michael Smerconish served as Cuomo’s primary substitute host for the past couple of years—and will fill in again this week—and could conceivably take over the hour on a permanent basis. However, he’s a centrist (some CNN viewers might argue a bit right-of-center), and the network’s primetime audience has skewed liberal in recent years. Smerconish also hasn’t rated particularly well when Cuomo has been out.

The network could stick with the analysis/opinion theme at 9 p.m., and promote Don Lemon to 9 p.m., after years of him holding down the later primetime hours.

How about the D.C-based hosts? The Lead and State of the Union anchor Jake Tapper has become one of the network’s most popular personalities and could move to primetime. However, CNN’s 9 p.m. hour has been more freewheeling and analysis-focused in recent years, and that’s not really Tapper’s style.

CNN New Day co-host Brianna Keilar, another D.C.-based talent, is considered a rising star at the network and could get 9 p.m. Former CNN host Brooke Baldwin suggested over the weekend that the network hire a woman to lead the hour, and Keilar fits the bill. She is outspoken and opinionated, qualities not necessarily ideal for morning TV (New Day’s ratings haven’t been great since she joined), but that are traditionally ideal for primetime cable news.

CNN should also check in with Brian Williams, if not to host 9 p.m. on the linear network, then at least to lead a show on CNN+. Williams is the hottest free agent on the market, but it’s unknown whether he wants to return to nightly cable news after years holding down the 11 p.m. hour on MSNBC.

Speaking of CNN+, if CNN ends up using 9 p.m. as something of a placeholder until the merger with Discovery goes through, perhaps the slot can be used to showcase upcoming CNN+ content. The hour could be used as a way entice people to sign up.

And that leads to a bigger question about CNN’s future: will the company’s priority going forward continue to be the primetime lineup or will it be CNN+? CNN’s primetime ratings have been poor in 2021, but they very likely might rise next year, given that it is a midterm election year. Or they might not, making 9 p.m. a less essential timeslot.