NEXT:Brian Williams Is Leaving NBC News at the End of the Year
PREVIOUS:Tuesday, Nov. 9 Scoreboard: Tucker Carlson Is No. 1 on Cable News, Posts Day-to-Day Growth 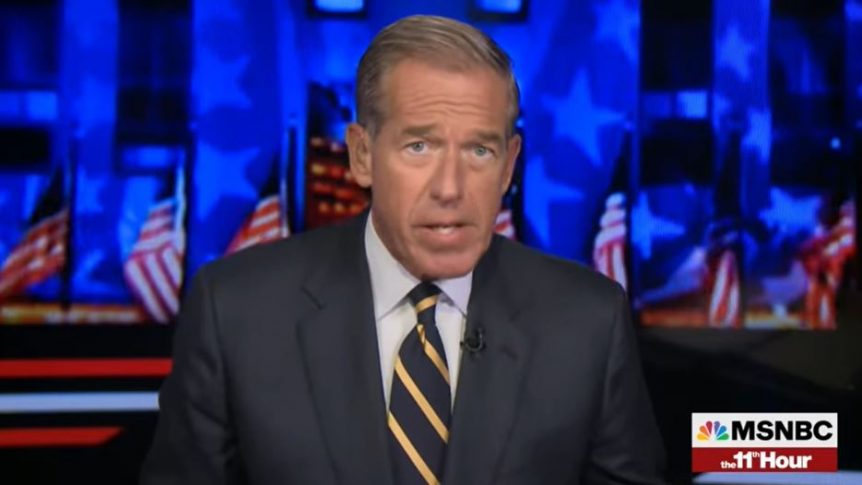 After 28 years at NBC News, Brian Williams announced on Tuesday that he would be leaving the company when his current contract runs out at the end of the year. Now the biggest question is where he’ll end up next.

Host of MSNBC’s The 11th Hour, Williams joined NBC News in 1993 and has become a household name in the years since, beginning as the network’s White House correspondent, anchoring the weekend edition of NBC Nightly News, getting his own show on MSNBC and CNBC, and succeeding Tom Brokaw as anchor of the flagship Nightly News for a decade. He was infamously removed from NBC Nightly News and received a six-month suspension from the network in February 2015 for misrepresenting events which occurred while he was covering the Iraq War in 2003. He told and re-told a made-up story about his helicopter coming under fire during his coverage.

Williams ended his NBC News career as MSNBC’s breaking news anchor (although he was not featured on the network’s 2021 Election Night coverage), and as host of The 11th Hour, which airs on MSNBC weekdays in the 11 p.m. timeslot, having debuted in 2016.

So, what’s next for the veteran anchorman who has spent nearly 40 years in broadcasting? “This is the end of a chapter and the beginning of another,” Williams said yesterday in a statement about his exit. “There are many things I want to do, and I’ll pop up again somewhere.” As for where he’ll “pop up again,” we have some thoughts:

One possibility is CBS News. Williams spent six years with the company’s flagship station, WCBS-TV, before joining NBC News. There was a recent New York Post report—which CBS has denied—about Norah O’Donnell potentially being in danger of losing the Evening News anchor and managing editor role. If that were to somehow happen, perhaps Williams, an evening news veteran, would be the one to replace her.

The New York Times reports that Williams “has not expressed much interest in returning to a traditional nightly evening newscast,” which, to be frank, seems to be carefully worded in a way that leaves his options open if CBS News were ever to come calling.

Additionally, contract talks are underway for CBS Mornings co-host Gayle King. Depending on what happens with that, a slot could open up there. It’s unlikely that Williams will want to take on a morning show role at this point in his career, but perhaps he could join CBS in another capacity. Could 60 Minutes come calling?

Neeraj Khemlani and Wendy McMahon stepped into the CBS News president and co-heads role this spring, and it’s possible they’ll want to make a splash.

ABC News, meanwhile, seems like a less likely landing spot. Since Williams’ exit from NBC Nightly News, David Muir has helped lift ABC World News Tonight past NBC and into the No. 1 spot in the evening news race. Muir also replaced George Stephanopoulos as the network’s lead breaking news anchor earlier this year, with the latter holding onto his GMA and This Week anchor roles, and getting his own production arm in partnership with ABC. Don’t see much room over there.

CNN looks to be a much better fit for Williams than ABC News. CNN+ is launching early next year, and the company has already poached NBC talent, from both in front of and behind the camera. The most prominent addition to-date has been former NBC News correspondent and MSNBC host Kasie Hunt, who will host a show on the CNN-branded streaming service next year. Hunt is also chief national affairs analyst for the network.

CNN is clearly interested in big name talent for its new service, and Williams is easily the biggest name on the free agent market. It was reported earlier this month that WarnerMedia News and Sports chairman Jeff Zucker offered Rachel Maddow $20 million a year to become the face of CNN+. Maddow and NBCUniversal eventually settled on a new contract that pays her a reported $30 million a year.

When asked whether CNN+ has had any talks with Williams, the network did not immediately respond to a request for comment.

Another option is the podcast route, as he undoubtedly has much to say. But for now, CBS and CNN+ seem to be at the front of the pack.

It’s end of an era at NBC News with Williams’ imminent exit, and the NBCU News Group has a lot of big decisions to make next year when it comes to MSNBC. Rachel Maddow is leaving her nightly primetime show next year, and viewers will see her on a slightly less frequent basis. But in regard to Williams, we doubt this is the last we’ll see of him on our screens, TV or mobile, and we’re interested to learn where he ends up next.