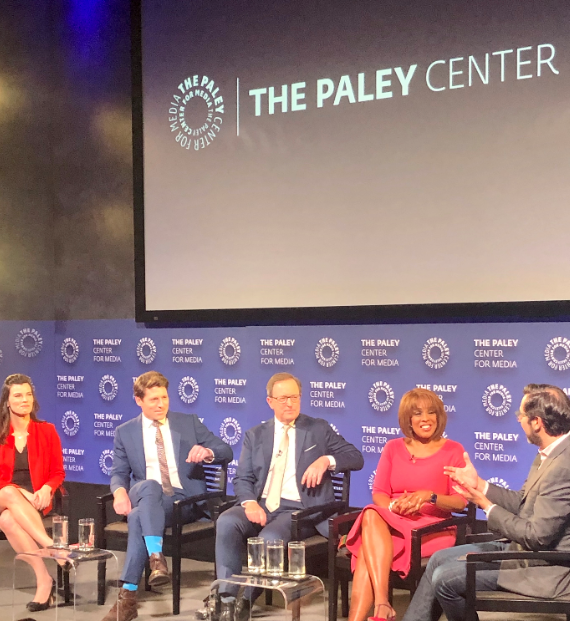 The team at CBS This Morning–Gayle King, Anthony Mason, Tony Dokoupil and ep Diana Miller–held court at the Paley Center this evening to talk about their revamped morning show, five months in.

The conversation, moderated by NPR’s David Folkenflik, was wide-ranging.

Dokoupil discussed his background as a print journalist and how it informs his work as a broadcast journalist.

Anthony Mason, whose career in journalism spans nearly 40 years and who spent seven years at CBS This Morning: Saturday before joining the weekday edition back in May, spoke about making sure that the audience feels “invited into his room” when they tune into the program.

“When I when I was growing up, my mother and stepfather had this amazing library and that was my favorite room in the house,” said Mason. I loved to sit in that room because it was visually really stimulating. There’s always really interesting stuff and books and things. I just loved being there. And the thing that I always go back to whenever I involved in the show is: I want this show to feel like that room. And something Bruce [Springsteen] said to you today, Gayle, fits in the same category when in terms of his concerts, he said, ‘We want people to feel at home, but you want to give them a surprise.’ That to me is the thing that I felt in that room was I felt both comforted, but I also felt excited. That’s a pretty unusual combination. That was the case when I was doing the Saturday show, which I did for seven years. Every Saturday, that’s what I was thinking. I wanted people to feel like you’re coming into my room, this is the stuff that I think is really cool and interesting. Let’s hang out and talk about it.”

Gayle King discussed her interview with R.Kelly from back in March, an interview which went viral and even got spoofed by Saturday Night Live. ( Leslie Jones played King, while Kenan Thompson was R. Kelly.)

King conceded that her reaction comes with being a veteran journalist and interviewer. “If that had happened to me younger, it would have totally freaked me out,” said King. “But at that moment, I wasn’t afraid. I just thought: ‘OK, let’s see how long this lasts.’ When he got out of the room, the crew and I were sitting there going, ‘What the hell just happened?’ Because that was a whole different experience for all of us in that room.”