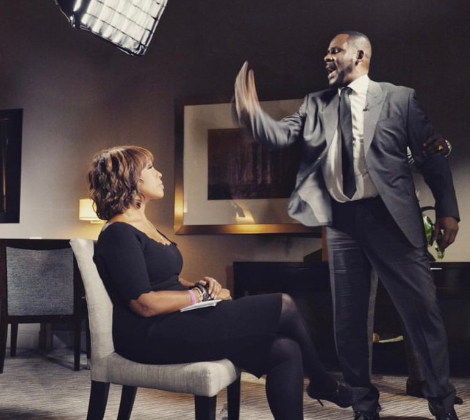 CBS This Morning co-host Gayle King is receiving rave reviews for her tough but fair questioning of R. Kelly during what would become quite an emotional and contentious interview.

In 2008, the R&B star was found not guilty on 14 counts of child pornography after prosecutors failed to convince a jury that he was the man seen in a sex tape with a girl as young as 13. In February, he was indicted again, charged with aggravated criminal sexual abuse of four women.

He also addressed his current relationship with the two women who live with him at his home in Chicago, 23-year-old Joycelyn Savage and 21-year-old Azriel Clary. Their parents believe Kelly has brainwashed their daughters.

This was Kelly’s first TV interview since he was indicted for sexual assault last month.

He expressed anger, and denial, started crying, raising his hands, and yelling at the camera during the interview. It was pretty brutal to watch. 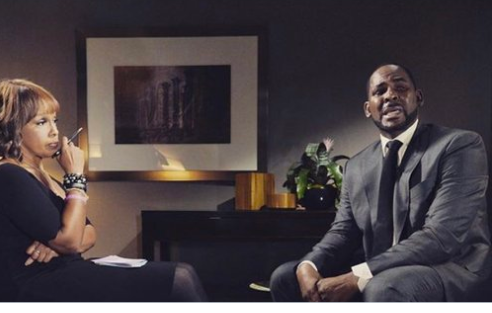 In what was a relatively rare move (at least in the era of Trump), Jeff Glor led off the CBS Evening News with clips from King’s interview with Kelly, which had ended not long before.

The clip from the CBS Evening News twitter account has received more than 2 million plays, as of publication time.

Here’s a portion of King’s interview with Kelly that aired today on CBS This Morning. More from her interview will air on Thursday on CTM.

“Stop it. You all quit playing! Quit playing! I didn’t do this stuff! This is not me! I’m fighting for my f***ing life! Y’all killing me with this sh*t!” @RKelly told @GayleKing, standing up. “I gave you 30 years of my f***ing career!”https://t.co/u4AENVJQsc pic.twitter.com/jLF7l8etYh

|@GayleKing is awesome because Gayle does not play TV. She is always herself 👏🏼👏🏼 https://t.co/73stjrPHmU

This is wild. @GayleKing is again teaching a master’s class in interviewing. She remains so calm and focused while @rkelly loses it. https://t.co/8IUtssouzt

Bravo @GayleKing for calm and and steady focus during #RKelly interview. Outstanding job!
Tell @CBSThisMorning we want to see the whole thing.

I mean… all hail @GayleKing https://t.co/EnzkLR3EB2

King’s contract with CBS News is coming up soon, and she’s making a heck of a case for a raise.

She recently interviewed the director of the Michael Jackson documentary, Leaving Neverland, as well as the accusers and members of the Jackson family. A few weeks ago, she had an exclusive with Virginia Democratic Gov. Ralph Northam. And in April of last year, she scored an important interview with Howard Schultz when he was executive chairman of Starbucks, in light of an incident at a Starbucks in Philadelphia where the store’s manager called police on two African-American men who were waiting for a friend. The incident made waves across the nation. Starbucks compensated the men and  apologized to them, and Schultz made the decision to close more than 8,000 Starbucks locations across the country one day last April for “racial bias education.”

It wouldn’t surprise us to see King stay at CBS, assuming she receives at least a reasonable offer. She’s very good friends with new CBS News president Susan Zirinsky, and we hear she was thrilled upon learning that Zirinsky had been named the next president of the news division.