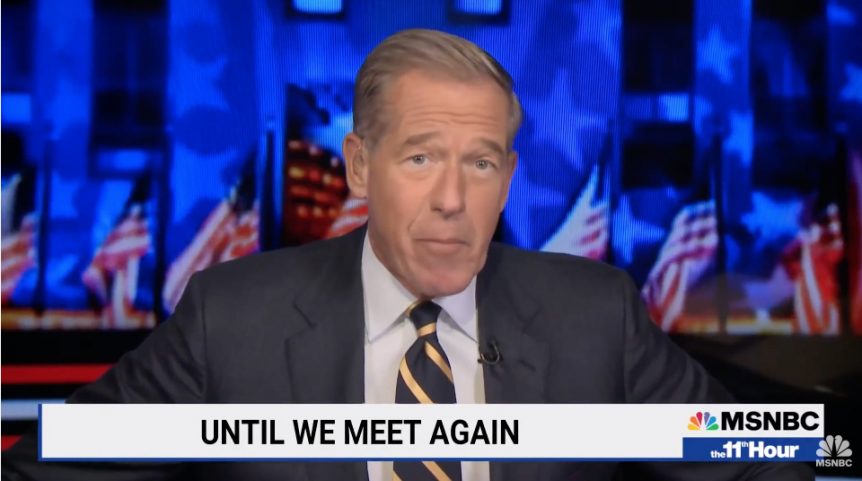 Brian Williams and NBC News’ 28-year relationship has come to an end.

The longtime newscaster and host of MSNBC’s The 11th Hour ended his show Thursday evening with a goodbye—and a warning to viewers on the state of democracy.

“My biggest worry is for my country,” Williams said during his final broadcast. “The truth is I am not a liberal or a conservative. I’m an institutionalist. I believe in this place and in my love of country I yield to no one. But the darkness on the edge of town has spread to the main roads and highways and neighborhoods. It is now at the local bar and the bowling alley, at the school board and the grocery store. And it must be acknowledged and answered for.”

“Grown men and women who swore an oath to our constitution, elected by their constituents … have decided to join the mob and become something they are not,” he continued. “That should scare you to no end.”

Williams finished the broadcast by thanking his viewers. “I’ll show myself out, until we meet again,” he said. “That is our broadcast for this Thursday night. Thank you for being here with us.”

Brian signs off from the 11th Hour one last time. pic.twitter.com/NSau5DkAdt

Williams, who has been the anchor of The 11th Hour for the past five years, first announced his departure from NBC News last month. He summed up his time at the network in an internal note to staff: “28 years, 38 countries, 8 Olympic games, 7 Presidential elections, half a dozen Presidents, a few wars, and one SNL,” he wrote.

Williams joined NBC News in 1993 after a number of years in local news, including a six-year run at CBS’ flagship station WCBS. He stepped into his 11th Hour anchor role in 2015 following his removal from NBC Nightly News and a six-month suspension for telling and re-telling a fictitious story of being in a helicopter that came under fire during his coverage of the Iraq War in 2003.

It remains to be seen where Williams will end up or who will permanently take over the 11 p.m. timeslot. Tonight, MSNBC will air the premiere of MSNBC Films’ Paper & Glue from 10 p.m. to midnight, and starting next week, The 11th Hour will be anchored by a rotating group of guest hosts.

As Williams exits, MSNBC is also faced with the task of replacing Rachel Maddow, who is exiting her role as the 9 p.m. host. Maddow and Williams were two of the network’s most-watched hosts in recent years.