NEXT:The 2020 Peabody Awards Ceremony Has Been Cancelled
PREVIOUS:For First Time Since 2001, CNN Marks 6 Consecutive Days at No. 1 Among Adults 25-54 in Total Day and Prime Time 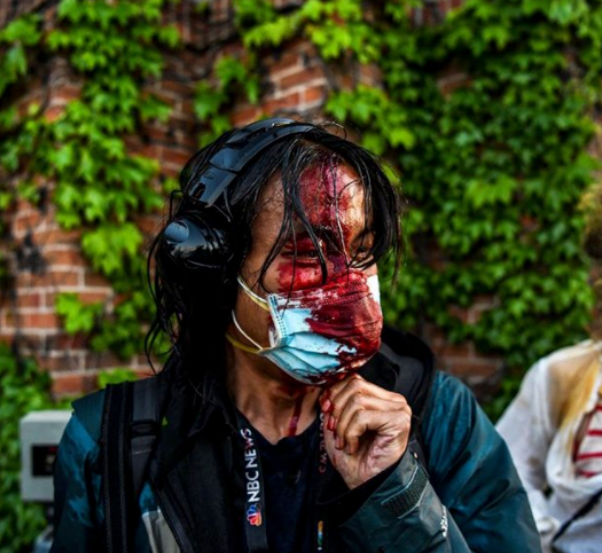 With the George Floyd police murder protests becoming increasingly intense over the weekend and early this week, we decided to change the focus of this week’s installment of #AskNewser to focus on this breaking news.

We caught up with some of the indefatigable reporters who have been covering the protests from the ground. We asked them about the supplies they have been stocking up on as they cover the protests and civil unrest in recent days.

NBC News international correspondent Cal Perry told us about his reporting from Louisville, Ky., on the protests that have been sparked by the police murder of Breonna Taylor, a 26-year-old African-American woman who was shot by the Louisville Metro Police Department in March.

“Most of my career has been overseas, where I’ve covered a handful of wars,” said Perry. “But this week, covering the protests in Louisville, Kentucky, I’ve packed the kinds of things I would for reporting on conflicts around the world—a gas mask, medical masks, press ID, two phones. My cameraman’s equipment bag has a Canon camera, six batteries, two lenses, one towel, one pair of socks, lens cap, phone cables and water. Our goal is to keep it light, but it all ends up being pretty heavy.” 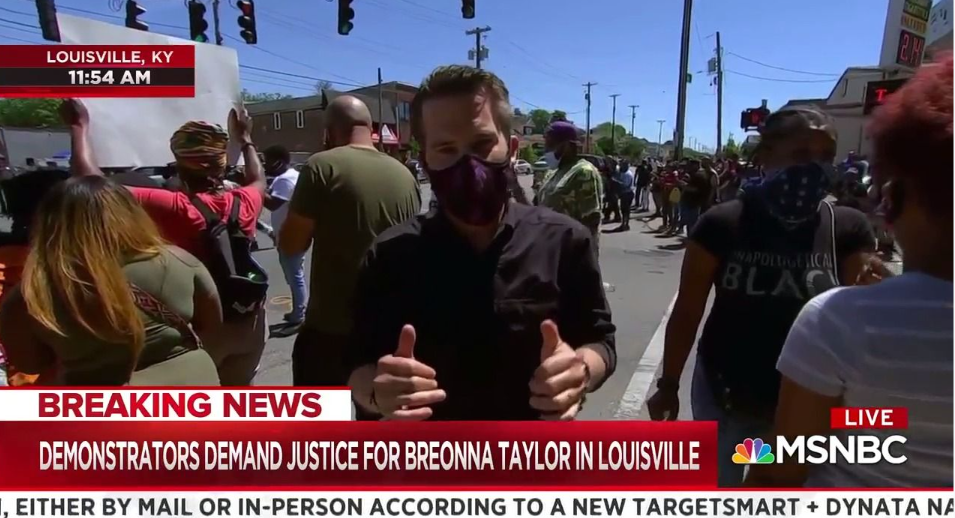 Garrett Haake has had quite a week reporting on the protests from Washington. He was struck by a rubber projectile on Sunday night as he reported on the protests.

“I pack a small drawstring backpack each day,” Haake told TVNewser. “I like to keep it as light as possible. I bring: my gas mask, an NBC News hat, an extra phone charger, a couple of light snacks, notebook and pen, and my coronavirus masks. No suits like covering Capitol Hill. I wear running shoes, hiking pants or jeans, and a solid colored shirt. I have NBC and Senate credentials that I try to keep as visible as possible.” 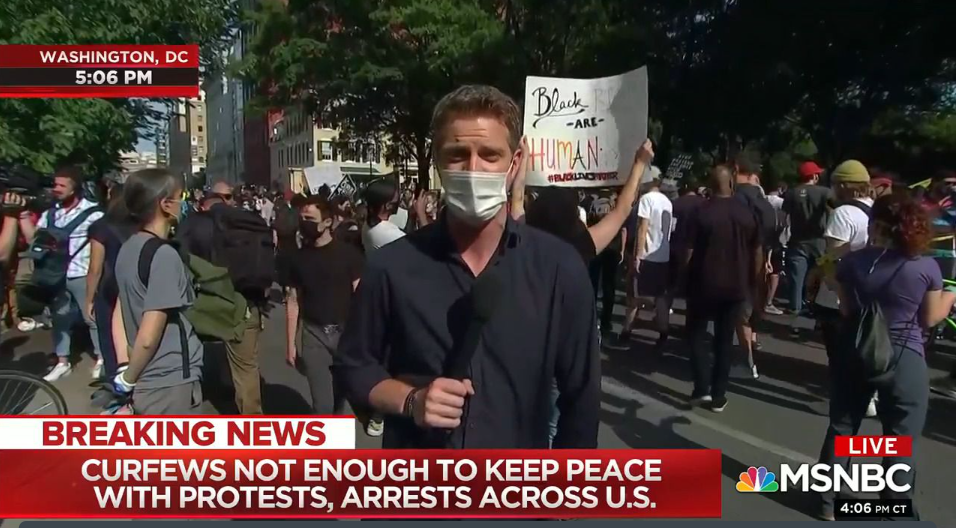 NBC News correspondent Jo Ling Kent has been covering the protests in Seattle, and was actually hit by a firework while reporting on-air during the 3 p.m. ET hour on Tuesday. Thankfully, she came came out of the situation unscathed, but a little freaked out, understandably.

“Packing a bag for a protest and a pandemic is something I had never done until last week,” said Kent. “The key when we head out is keeping it light. I take my cloth and surgical masks, along with hand sanitizer. I have terrible eyesight so I always pack my glasses and extra contacts. Then there’s the gas mask we’re trained up on, goggles, two phones, phone chargers and wireless earbuds fully charged. Comfortable sneakers, a light puffer and a field jacket. A bunch of snacks and water.” 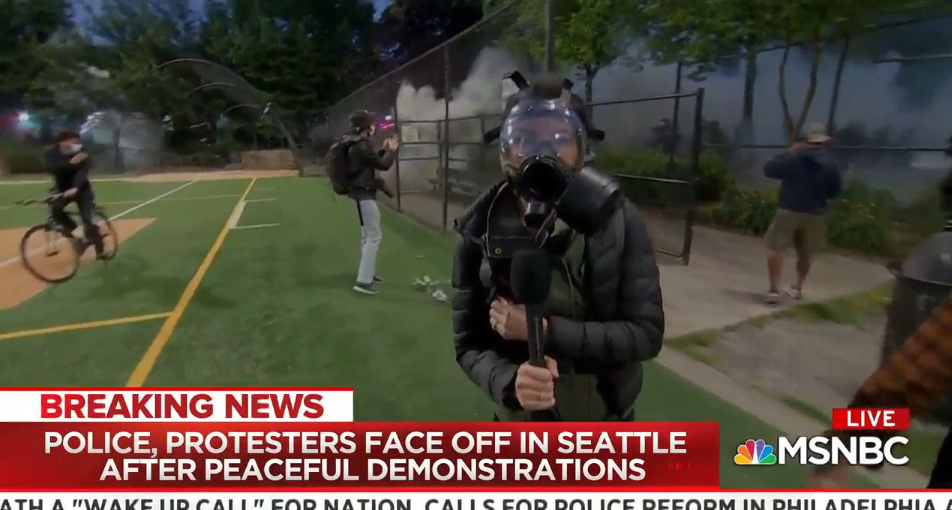 NBC News video journalist Ed Ou gave us a different perspective, being an off-air TV newser but just as vital, if not more so, when it comes to the live coverage of these protests.

“I carry a smaller-size camera so I can sling it around my shoulder and keep my hands free,” said Ou. “The key thing for me is to be able to stay agile so I can move quicker. I have a backpack with essentials like a helmet and gas mask on a carabiner on my right hip. Now because of Covid, I have my N95 strapped into a Tupperware container dangling on my left hip. That way, I can switch in-between a gas mask for tear gas and then the N95 if I end up in a crowd, which is unavoidable in these situations. The solid Tupperware lets me keep the front of the mask from touching any other part of me, to prevent cross contamination. I have a clearly labelled press badge on hand where sometimes I will wear it around my neck, or in sketchy situations, I will put it on a carabiner on my backpack strap so someone cannot grab it.”

Of course, NBC News and MSNBC aren’t the only outlets reporting on the nationwide protests. We also caught up with Fox News correspondent Bryan Llenas, who has been reporting on the protests across New York City.

“I have been wearing—wait for it—a Billabong Fanny pack across my chest with all of my essential supplies,” he told TVNewser. “We are moving from one hot spot to the next and following protesters so I have just left it on during my live reports. Inside, I have two iPhones, AirPods, two extra battery chargers, Purell, a mask, my NYPD press badge, my wallet, double A batteries for my mic and yes, makeup powder because of TV!”

How about food and drink? “In the car I stock up on four water bottles and two Snicker bars to get me through from night and into the following morning,” said Llenas.

The hours have been demanding. After all, the New York City-based protests have been going all night into the early morning.

“We have been starting every day at about 5 p.m. and going until 4 a.m. The protests zig-zag around the city and splinter off into different groups so that’s been logistically challenging. We have been listening to police scanners in the car and constantly driving up to different hot spots. Where protesters are clashing with police, fires have been started, or looting. We have driven all over New York City.”

Llenas adds: “The scariest two times were Saturday on Bedford Avenue in Brooklyn when police and protesters violently clashed for hours. Bricks were thrown. Multiple cars were lit in fire. During the two nights of mass looting, we were going live as looters were stealing and walking right past us. During one live report we walked in on people looting the Chanel in Soho, and the group threw objects at us and threatened us to leave.”

Llenas gives a shout out to his photoragrapher, Oleg, and his security team. “I could not have told the stories without them.” 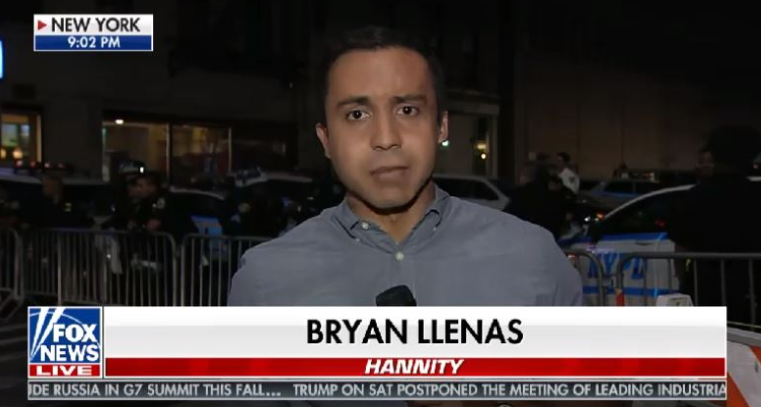