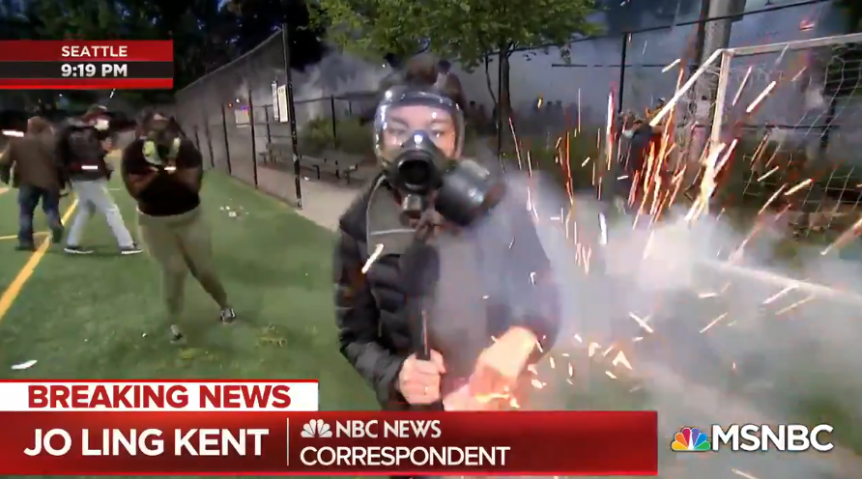 Peaceful protests turned violent across many American cities again Monday night. And the cable news channels continued their nonstop coverage of it.

Caught in the crossfire of tear gas, rubber bullets, flashbangs, fireworks and other projectiles are the TV news reporters covering the chaos. In Seattle last night, MSNBC reporter Jo Ling Kent was reporting from the Capitol Hill neighborhood. As police began advancing on protesters, she was hit in the arm by what was at first thought to be fireworks, but during the 3pmET hour on MSNBC Tuesday, Kent said she now believes it was a flashbang grenade fired by police.

A short time later, Kent tweeted, “Hey everyone. Thankfully, our whole team is ok and safe. I’m totally fine – my jacket sleeve got singed and that’s it. So sorry for the curse words.”

On the East Coast, around the time of President Trump’s photo op in front of St. John’s Episcopal Church, during which tear gas was used on peaceful protesters, a crew from 7 News in Australia was assaulted by a police officer using his shield.

Police outside the WH just repeatedly bashed a cameraman as they pushed back protestors – just now on @ABC7News pic.twitter.com/XyE2sI6I3v

That’s 7 News correspondent Amelia Brace and cameraman Tim Myers being assaulted live on the Tuesday edition of the Australian broadcaster’s Sunrise on 7.

“You heard us yelling that we were media… but they don’t care,” Brace said on air. “They are being indiscriminate at the moment. They were quite violent and they do not care who they’re targeting at the moment.”

Watch the shocking moment #7NEWS reporter @AmeliaBrace and our cameraman were knocked over by a police officer LIVE on air after chaos erupted in Washington DC. pic.twitter.com/R8KJLnfxPN

“The attack on our reporter and cameraman in Washington today is nothing short of wanton thuggery,” said Craig McPherson, Seven Network’s director of news and public affairs.

Australian Prime Minister Scott Morrison is now calling for an investigation into the incident.