NEXT:Leland Vittert and His Fox News Crew Attacked by Protesters in Washington
PREVIOUS:Jeff Zucker When Asked About Mayoral Aspirations: 'I Always Like a Challenge;' CNBC Prime Time Could Go Conservative Opinion 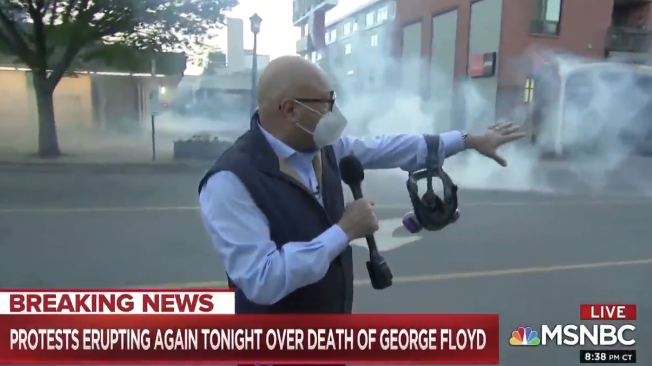 Journalists were among the many Americans hit with projectiles while on the scene during the George Floyd murder protests across the country over the weekend.

Two hail from the same network: Ali Velshi and Garrett Haake, both of MSNBC.

Haake was struck by a rubber projectile on Sunday night as he reported from Washington, D.C., on the protests.

Haake was in the downtown area of the capital, by Lafayette Square, as he reported on police efforts to contain the protests after rioters destroyed cars and damaged buildings. Haake swore to himself as he recorded the sounds of multiple explosions in the distance, and as he decided to move to another position, he eventually screamed “Damn it!” as something hit him.

Katy Tur, who was anchoring the network’s live Sunday night coverage, told Haake to stop talking and move to safety. He told Tur that he was OK, and continued his report by saying he got hit in the side by either a rubber bullet or a pepper ball.

Haake later took to Twitter to explain what happened, and later apologized for swearing on air:

Thanks to everyone who sent kind messages after this scary moment. I’m fine, thanks especially to our crew & security team. I have some souvenir welts on my side to show for it. And sorry for cursing on tv. Those rubber bullets/pellets/bean-bags hurt! https://t.co/A3NfsMDC3X

This comes the night after his colleague Ali Velshi was struck by a rubber bullet and later tear gassed while covering protests 1,100 miles away, in Minneapolis. Velshi, the network’s Sunday 8-10 a.m. ET anchor, suddenly exclaimed, “Aw sh*t, all right guys, I got hit.”

I’m hit in the leg by a rubber bullet but am fine. State Police supported by National guard fired unprovoked into an entirely peaceful rally

Haake and Velshi were far from the only journalists attacked or jailed (at least briefly) over the weekend. According to the site Bellingcat, at least 50 journalists experienced attacks here in the U.S., ranging from a Louisville, Ky.-based local news reporter, to a team of Norwegian and Swedish journalists.

Something you might see in third-world countries, not America.