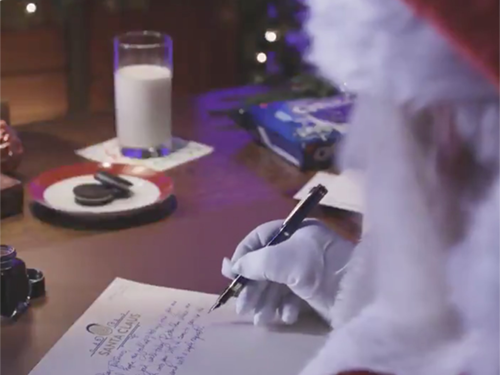 Somewhere in the marketing firmament of Mondelez, let’s assume that this conversation happened (this is all made up, by the way).

“Let’s be edgy on Twitter. I think Santa should write a letter saying that he wants nothing but Oreo cookies this year!”

“Listen, I was here during the ‘Big Game Big Win’ when the lights went out during the Super Bowl. I know what works on Twitter. But instead of dunking in the dark, we’re going to dunk on Nana’s cookie recipe!!!”

“Oh, and we can have Santa sliiiiiide into DMs…”

“I really wouldn’t do that. I’m not sure that you know what that…”

“So, what you’re telling me is that you are essentially going to have an insufferable Santa because we want him to eat nothing but Oreos?”

“I mean, Santa really seems like a complete jerk here. I like sugar cookies and chocolate chip. Don’t we own Chips Ahoy? And why would we dunk on Nana, again?”

“Nana’s recipe has a bunch of dried fruit in it. That’s gross!! And, because SANTA WANTS OREOS!”

“Does he, really? This seems like a waste of time and money. We did such a nice ad last month with the cute elf. That was really well-done and fun. Why burn all of that goodwill up trying to be edgy on social?‘’

“Too late. It’s out there, along with the hashtag.”

“Don’t worry! The responses will be glorious!!”

Santa and all your customers want you to use sustainable palm oil.

No thanks, nice try Oreo. Stickin’ with rice cakes for fat Santa and carrots for the reindeer. 🎅🏻🦌🦌🦌🦌🦌🦌🦌🦌

What about those families that can’t afford your overpriced cookies?
Are you really telling kids “Sorry. Santa’s not happy with you because you didn’t get him a specific cookie”?
No #OREOforSanta. No OREO for ANYONE any more.
And Krampus will tell you where to shove your cookies.

I think Santa would rather have some #ClimateAction
His home is melting ❄️ 💧 ⛄️https://t.co/eyj2QIHuPI

Santa’s reaction every time he gets an oreo instead of a fresh homemade @NestleTollHouse #OREOforSanta pic.twitter.com/n5mvogSPP1

#OREOforSanta Bullshit! My father always taught us that Santa’s favorite on Christmas Eve was a Heineken and a meatball sub – it was easy to remember because it was the same thing our father liked!

So Santa wants cookies made in Mexico with cheap labor from a company who fired Americans in Chicago? Okay. I’ll replace the filling with dog poop. Santa wants scab cookies? I’ll give him scab cookies.

“Doesn’t matter anyway!! I just nailed a gig at Pepsi. I have this idea with one of the Kardashians!”