While everyone is out in France celebrating the very best of advertising, with the expected parties winning big (Nike, NYT, Burger King), here we are back on earth reviewing the stuff that people actually do all day to make a living and promote their clients’ products.

The pitches have been thin like gruel this week, but we get it—the entire year literally leads up to Cannes, and even those left behind don’t have time for much else.

That said, we did notice a trend! It is branded swag.

Earlier this year, Dunkin’ Donuts debuted a running shoe in tribute to the Boston Marathon. Only 2,000 were produced, which makes them highly collectible, or something. But that was not the first time the pastry maker (we refuse to drop the donut designation) created clothing. Espresso-wear fit to hold your fancy coffee came out late last year by way of BBDO New York, and now the agency is back with some seasonal gear!

“Interest in Espresso-wear was so high the first time around that consumers wrote and called asking where they could be ordered,” the release tells us. So now they are real, and they’re for sale! Fans can also “enter for a chance to win their own latte-nk top through Dunkin’s Instagram page by telling us why they want to hold their lattes in their clothes.”

Maybe because having two hands and using at least one of them for the time it takes to drink a caffeinated beverage is just too difficult?

Since this is #brands hijacking #culture, you knew Vayner would be involved. Their effort for Planters Peanuts hit our inboxes earlier this week, and it is not in any way a blatant Air Force One rip, no sir.

This too, is a real product that can be yours for the low, low price of $170. Who would wear Crunch Force 1? We have no idea. Perhaps more importantly, what does it have to do with peanuts?

“The legume has always been the epitome of style – and now fans can dress as dapper as he is,” the release tells us. Question unanswered, then. It sort of looks like Planters finally made good on that threat/promise to Nike from back in February, when a basketball player’s shoe exploded in mid-court.

.@Nike, I have a suggestion: pic.twitter.com/pH97wMxbDj

Finally, another snack food tied to an athletic shoe: Ruffles. Earlier this week, Adweek visited the NBA Store to talk to the Lakers’ newest player Anthony Davis and his footwear creation, which is a Nike sneaker related to its sponsor’s “ridge tops” variety only in that the colors of the packaging are the same as the colors of the shoe and theres’s also a ridge-looking part around the high top that supposedly mirrors the “experience of opening a Ruffles bag and the silhouette of the ridged chip.”

Our favorite part of that interview involves Davis revealing that his favorite Ruffles flavor is, in fact, cheddar and sour cream. 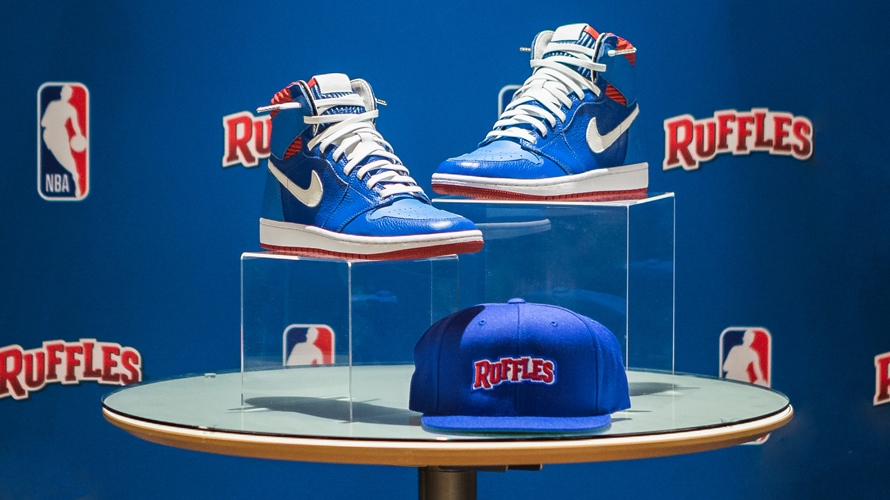 This is gonna be point BBDO, simply for the functionality of the products. We refuse to use the word “innovation.”