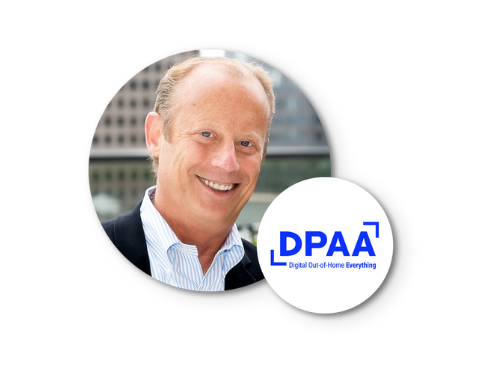 For the past several years, people have asked if I was planning to attend the Video Everywhere Summit. For whatever reason, I haven’t been able to go. One year it was another event that overlapped. Another time, I was on vacation. Then there was the year that I attended a bris. Priorities, folks.

The show run by the Digital Place-based Advertising Association (the OOH trade org) is worthwhile by all accounts, judging by the mild FOMO felt post-event in years past. And now, thanks to those pesky “uncertain times,” the Video Everywhere Summit is going virtual for three days, starting on Oct. 13.

“So many people have told us that DPAA has set the standard for livestream events in the work-from-home environment,” enthused DPAA president and CEO Barry Frey (pictured above in a bubble format) in a statement. “We take great pride in this and pledge to make our livestream global Video Everywhere Summit our best event yet, as evidenced by the blockbuster lineup of influential speakers who will address delegates over the course of a very digestible, three-day format. We expect a record turnout since the online nature of this year’s summit will enable many first-timers to attend, including a significant number from overseas.”

While the unironic use of “blockbuster” seems a bit much, it certainly is a good lineup, especially agency folks like UniWorld Group CEO Monique Nelson, Canvas Worldwide CEO Paul Woolmington (who won a Bafta this year for his headshot), MediaCom USA CEO Sasha Savic and Mark Read, WPP’s CEO who has, erm, been in the news of late.

Of course, we’re in the political season, and no summit would be complete without some sass. In the case of DPAA, it’s bringing in No. 24 on Newsweek’s Power Elite list (in 2010), pundit Frank Luntz. He was also one of Time magazine’s 50 most promising leaders aged 40 and under in America. But he’s now 58, so this was clearly from some years back as well.

Digression and name dropping out the way, the topics for Video Everywhere 2020 include omnichannel and programmatic, diversity and inclusion, and the globalization of media and brands.