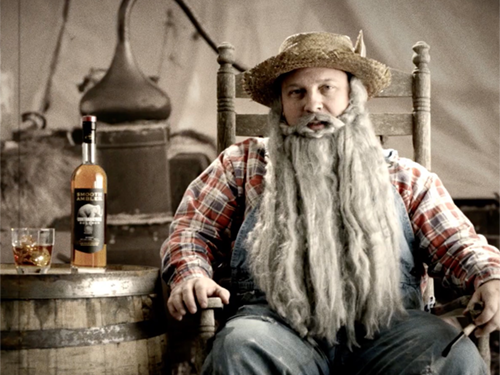 Let’s start with a story. A few years back, I started the new season with my 40+ soccer team: Rose City Revolution. Like a good number of people my age, I didn’t exactly keep myself in shape or even kick a ball around until the whistle blew, starting our first match of the season. Roughly speaking, I hadn’t done much of anything soccer-related for a good four months.

It’s not an eternity, but it takes time to get back in the saddle. That game wasn’t the worst I ever played … but it wasn’t the best, either. To wit, after a few weeks, I went on a hot streak, scoring 10 goals in eight straight games.

This scenario could very well be an apt analogy for the first work that we’re seeing that was led by Jeff Benjamin, who joined Tombras in Knoxville as chief creative officer in September. The client is Pernod Ricard’s Smooth Ambler, a small-town distillery from West Virginia.

As it turns out, the co-founders of the distillery are pretty no-nonsense and ain’t too shy, either. So, the sensible direction here is to lean into that, right? Of course it is. Let’s be honest, the “no B.S.” thing has been done before, and it takes a little nuance to pull it off well.

Promoting the brand’s Contradiction bourbon, a duo of ads features the founders, John Little and Johnny Foster. Thematically, the agency and brand leaned into the “disdain for misleading marketing” thing. Specifically, “The Johns” (as they are known) don’t think that sweeping tales of finding a secret recipe or gently rocking a chair by a venerable, old cask are honest. Makes sense.

“As we dug into the strategy and looked at the category as a whole, we realized there was a lot of truth-stretching. The truth about the brand is that it’s boldly, refreshingly transparent,” said Dooley Tombras, president of Tombras. “The Johns have always been honest about their business, their sourcing of bourbon [among other things,] and it’s that attitude that inspired the brand idea that doubles as the tagline in these spots.”

“In our business, marketing fluff is to be expected. But some of our whiskey-making cohorts engage in everything from ‘highly creative’ adaptation of a half-truth, to outright falsehood, in an effort to entice the consumer,” added Foster. “We want you to buy our whiskey because we’ve earned the privilege of your spending dollar, not because we’ve successfully built an affinity for our brand on the back of some fraudulent fable. Poetic license and driving without a license aren’t the same thing. Tombras gets that about our DNA and knew how to help us express it.”

The concept works … to a point. Yeah, it’s funny, but 15 to 20 seconds for the setup into the break of “we’re from West Virginia” thing feels like a momentum killer. The concept could have been stretched out a little more and may have been better served as (gulp) long-form satire.

Don’t get us wrong, these ads are pretty good and will probably work just fine. Plus, this is the maiden voyage for Benjamin, and there is plenty of other fertile territory to explore for this and the other brands on the agency’s roster. Perhaps it’s a sign that Tombras is just starting to get warmed up and will start putting the ball in the back of the net with the new creative leader running the show.