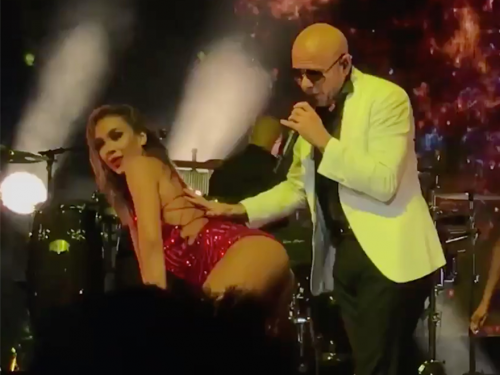 Two steps forward, one step back, maybe with a little cha cha in the middle.

Just as it seemed the advertising industry might really be making headway on breaking down its longtime boys’ club, Advertising Week New York (no relation with our parent company, Adweek)  ended on a facepalm moment that has sparked vocal backlash on Twitter.

The weeklong event ended with Pitbull giving a performance that, per usual for the entertainer, included a group of women dancing suggestively around him and twerking as he pointed enthusiastically. It’s not too strange that an advertising event would invite Pitbull, who recently launched agency 305 Worldwide with Horizon Media, but  as a performer he wasn’t the most logical selection for an event that included a “Future Is Female” series featuring panels such as McCann New York president Devika Bulchandani‘s “Discover Talk: It’s a Great Time to be a Woman.”

From there the backlash spread.

SMU Advertising executive-in-residence Amber Benson perhaps summed up the response best with a tweet sarcastically suggesting, “Nothing tells young women in this industry that they will be valued for their talent and contribution like this clip.”

Nothing tells young women in this industry that they will be valued for their talent and contribution like this clip. “Welcome to advertising! Even though we’ve fired multiple sexual harassers, rest assured, we still have no clue!” @cindygallop https://t.co/CcJybK4w6V

Other respondents pointed out that Gallop had opened the event last year.

Didn’t #AWNewYork lead with Cindy Gallop last year? It’s like an achievement in the agency world to think as little as possible about this kind of thing. https://t.co/5JhItjpe39

Dozens of talks on equality, defeating bias and combating gender stereotypes in advertising.

The 3% Conference weighed in as well.

Seems like neat, inclusive use of money at a professional event, @advertisingweek. https://t.co/6ejuKVOQAI

This is just a small sample of the responses to the clip that AdAge had posted without commentary.

Advertisers: we want to do better when it comes to female representation in ads.

The consensus seems to be that Advertising Week New York did not think this through and will have some bridges to rebuild if it hopes to have credibility moving forward on the issues of sexism and empowering women.

We have reached out to Advertising Week New York’s PR team for comment and will update if we hear back.