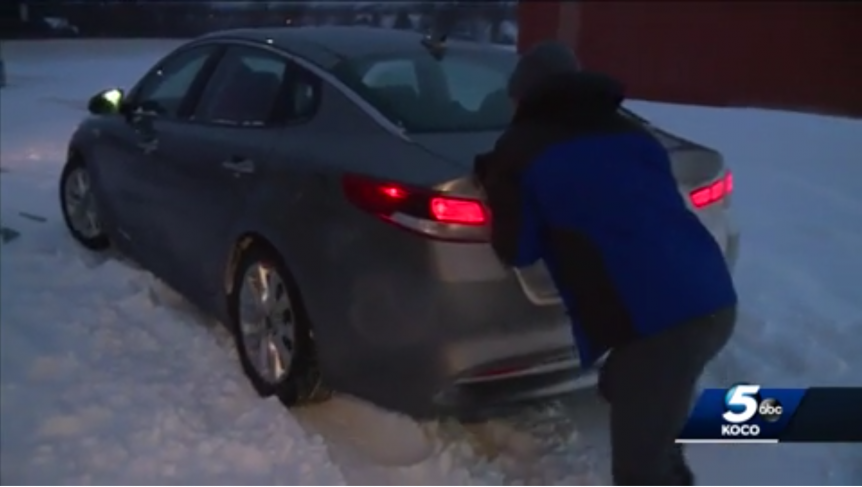 A winter storm sweeping across the southern plains has brought record low temperatures, unexpected conditions and widespread power outages in areas not used to such extreme weather.

Social media snapshots from reporters and anchors at local stations affected by the storm from Arkansas to Louisiana are giving viewers a close-up view of what is happening.

Getting drivers back on the road seems to be the theme in Oklahoma City. KOCO reporter Evan Onstot and station photographer Dan Thompson switched between reporting about conditions in the area and helping those affected. Onstot told viewers in a live shot that the pair helped push at least five people out of the parking lot they were standing in. Station meteorologist Michael Armstrong helped a motorist dig his car out.

Onstot also gave a shout-out to to photojournalist Thompson.

Viktoria Capek at KATV in Little Rock, Ark., showed the drive through the state’s capital:

Capitol St. in Little Rock 8:10 a.m.
My car barely made it through downtown @KATVNews pic.twitter.com/c3EV6AB92U

Getting to be that time to hunker down y’all. (@wfaa) pic.twitter.com/6OkIHY9JZr

WFAA executive producer Ryan Wood gave Twitter a look at what the storm brought his neighborhood:

(Eh. I need to workshop the pun a little bit.) #wfaaweather @wfaa pic.twitter.com/j6mtUZ409W

Snow in Monroe! 😳☃️❄️ What is this? Christmas morning?! My goodness! @wdsu pic.twitter.com/RWnyTbJQC4

From Southwest Freeway to I-45. All of Houston’s major highways are covered in snow and ice. Enjoy the snow from home today and tune in or live stream @abc13houston. We’ll keep you updated on the weather conditions! Stay safe and stay warm. https://t.co/KoQmv0BG3V pic.twitter.com/dETK0ebRbB