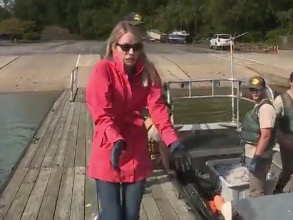 WEWS reporter Olivia Fecteau had a good plan during her live hit this week: she would hold a fish that was caught and then release it back into the water.

But not once, but twice, Fecteau dropped the fish onto the deck. The camera was rolling when it happened.

At the end of the video we find out the fish is OK. So now we can admit, it made us chuckle.