NEXT:Sinclair Lays Off 5% of Workforce, Blames Covid-19
PREVIOUS:Portland Reporter Says He Was One of Many Laid Off by Sinclair on Wednesday 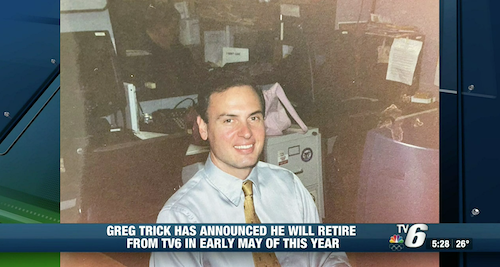 WLUC anchor Greg Trick will retire at the beginning of May after 30 years at the Marquette, Mich., NBC and Fox affiliate.

“Greg has been an incredible anchor and resource in the newsroom,” said news director Steve Asplund. “He’s been a stabilizing force mentoring new journalists in the newsroom and to the Upper Peninsula. Greg is one of the good guys. He always has a kind word and encouragement to those he works with each day.”

“Greg has been a rock-solid employee for TV6 for 30 years,” said station vice president and general manager Rick Rhoades. “He will be missed. The entire TV6 family would like to wish Greg and his wife, Aoy, the best life has to offer in retirement.”

The station says Trick plans to travel in his retirement.