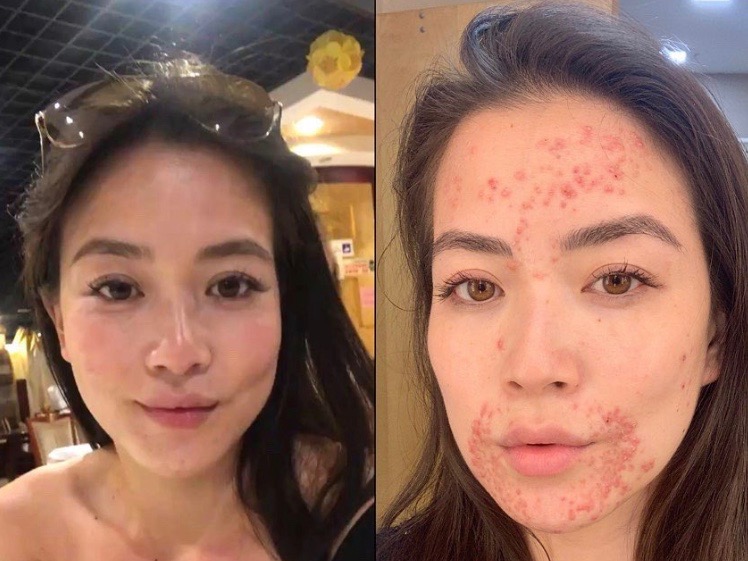 For the past four months, the Miami anchor has been suffering from a skin condition called perioral dermatitis.

She spoke out about the condition a couple weeks ago, saying the bumps that have showed up on her face have become tough to hide. And yesterday, she penned a note on the station’s website saying it’s gotten to be too much.

For the past 4 months, I’ve been going on-camera everyday trying to hide something from all of you – a skin condition I had never heard of before until I was diagnosed with it called ‘perioral dermatitis.’ It is essentially acne meets eczema: a painful, inflamed bumpy rash around my mouth. It has also since spread to my forehead.
When I first moved to Miami, my eczema flared up and I sought help from a dermatologist. A PA gave me steroid creams. Based on advice from the four dermatologists I have seen since then, here is what I have learned and want to share with you.

Powerful steroids like the ones I was given should never be used on a long-term, daily basis (and if you are instructed to do so, get another opinion!) Steroid creams were a quick fix for my eczema but triggered a completely new skin condition, much harder to treat and cover.
Many people are not aware of the potentially severe side effects of steroid creams. We often consider side effects for oral medications, but not necessarily with something topical. Always be sure you are fully aware of any and all side effects associated with a product or prescription – even if it you’re putting it ON your body, not IN it.
It is a very confusing condition. The most common known causes are overuse of steroid creams/nasal sprays, fluoride toothpaste, or sometimes… the cause is unknown, as I have learned for many of the people I have met online since through a Facebook support group.

I have been given all the textbook treatments for Perioral Dermatitis, more antibiotics and prescription creams than I can count. Nothing has worked, although I’ve been told it looks much better!

Wang says she still feels a lot of guilt and shame. So she’s taking the time off to not wear makeup with the hope that her condition will heal.

She plans to keep viewers updated on social media.