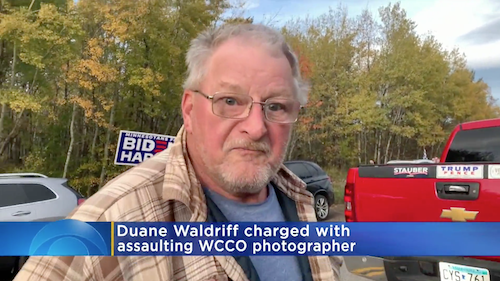 A Minnesota man has pleaded guilty to one count of disorderly conduct after an incident with a WCCO photographer during a Trump rally last September.

70-year-old Duane Waldriff was accused of hitting the phone out of WCCO photojournalist Dymanh Chhoun‘s hand during the rally.

WCCO says Chhoun was using his phone to record Trump supporters who were confronting protesters when Waldriff turned around and said: “You guys want to be peaceful? Be peaceful! You want to be violent? Come to me!” He then knocked Chhoun’s phone out of his hand.

For his guilty plea, Waldriff will avoid jail time and will have to write a letter of apology to Chhoun or face a $400 fine. The charge of fifth-degree misdemeanor assault was dismissed in the plea agreement.

Watch the video of the altercation below: