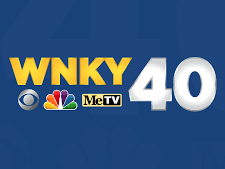 The live newscast on a Bowling Green, Ky. station has been temporarily suspended since Friday after the station took the extraordinary step of shutting down operations due to possible Covid-19 exposure.

WNKY, the NBC station in the market, posted on its website that it has temporarily suspended its newscasts in an “overabundance of caution.”

“Out of an overabundance of caution, WNKY 40 Television is choosing to send our employees home who may have come into contact with someone from outside the company who has tested positive for COVID,” the station wrote in a notice on its website. “We are temporarily postponing the broadcast of our live news while we concentrate on the safety of our employees. We hope you can be patient with us while we do our best to keep everyone safe and healthy.”

It’s unclear who at the station made contact with the person from outside the company, but cases have been surging in the state. Over the weekend, Kentucky Gov. Andy Beshear reported that the state had recorded its most-ever number of new Covid-19 cases. The state was also experiencing its highest positive test rate since May.

The shutdown comes as many stations around the country have been forced to operate with minimal staff in an attempt to contain the virus’s spread.

Despite precautions, many local newscasters have still contracted the virus. Some of them have made the decision to document their experiences.