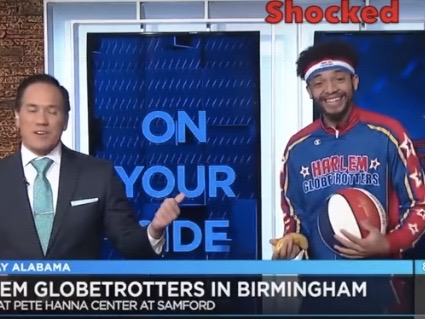 Harlem Globetrotters player Maxwell Pearce is speaking out about an incident at an Birmingham, Ala., station earlier this year that he said was racist and insensitive.

The player was doing a segment on WBRC’s morning show when anchors began throwing fruit at him, he revealed in a video posted earlier this month.

Pearce said he felt violated by the incident, which occurred five months ago. The player was supposed to be doing basketball tricks for anchors Clare Huddleston, Mike Dubberly and weatherman Mickey Ferguson when Huddleston and Ferguson threw tangerines and a banana at him during the live television segment.

“By sharing this story, it can inspire people to share their experiences of racism and discrimination,” Pearce said in the five-minute video. “Throwing a banana at a Black man and passing it off as entertainment displays an unacceptable lack of awareness, and quite frankly I’m having a very difficult time understanding how someone could work in the media field and not know this is offensive.”

He also said the reason he delayed saying something publicly is because he thought he would lose his job.

According to AL.com, WBRC news director Shannon Isbell said that the station talked with Pearce and offered an apology.

“WBRC Fox6 would like to take this opportunity to again extend a heartfelt and sincere apology to Globetrotter Max Pearce,” Isbell said in a statement to the publication. “An on-air segment promoting a Globetrotters event with Mr. Pearce months ago was intended to be lighthearted. However, it became something deeply hurtful to our guest as the result of our lack of understanding. We are grateful for the several enlightening, educational conversations we have had with Max over the last two months. I was happy to have him on our show about racial inequality and faith that aired last Friday.”

Pearce said that Fox cut historical information he provided about why the act was offensive in a follow-up interview with the station.

“Whether the disrespect was intentional or not, it doesn’t lessen the damage that was caused,” Pearce said. “This carried deep racial undertones that date back to the early 1900s when Black people were held on display in human zoos. And this is a prime example of how the effects of 400 years of oppression have impacted this country.”