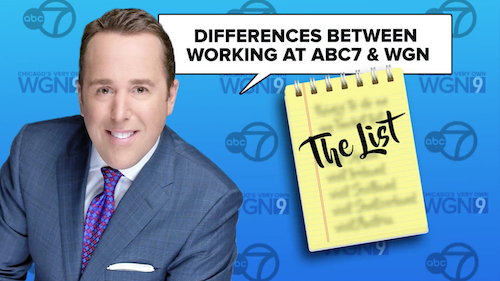 While filling in for Larry Potash Monday on the newscast/house party that is the WGN morning news, Bradley—who worked at WLS for 14 years before joining WGN in 2017—did what any polite guest would do and brought a gift.

That gift was a list highlighting the differences between working at his current station and Chicago’s ABC-owned WLS. One of the differences Bradley gave? “Here you can call your co-anchor any name you want,” he said.

The remark hinted at a recent controversy at WLS. Giangreco was reportedly let go in March after referring to co-anchor Cheryl Burton as “ditzy.”

The segment continued with an old clip from before the time of HD broadcasts, in which Potash called co-anchor Robin Baumgarten a “whore” on air.

“No, it did not—but I still love him,” Baumgarten added.