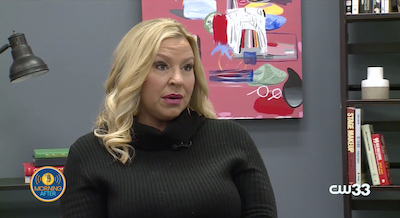 A former traffic reporter at Dallas CBS-owned station KTVT spoke about her role in the recent allegations of bad behavior at CBS Television Stations.

Tammy Dombeck spoke to CW33 show The Morning After on Nexstar’s Dallas station KDAF about settling a lawsuit with the station group.

Dombeck told show host Ron Corning she had 15 years of experience and was freelancing for the station when she lost out on the full-time job for a younger, less-experienced candidate. She says 99% of the candidates she was up against were “pageant girls and NFL cheerleaders.”

In 2015, TVSpy reported Dombeck had been “abruptly fired.” At the time, “Dombeck told The Fort Worth Star-Telegram that she knows why she’s being replaced: her age.”

She encouraged others who feel they’ve been they’ve been discriminated against, to step forward even if they don’t think they can afford a lawyer. Dombeck told viewers the EEOC (Equal Employment Opportunity Commission) offers free services, adding she didn’t pay “one dime” for her lawsuit.

We asked CBS about it. We’ll update when we hear back.