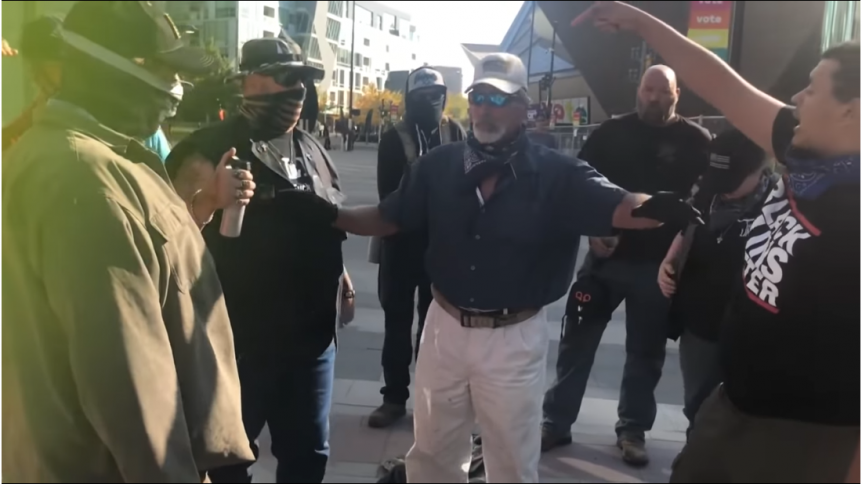 KUSA, the Tegna-owned NBC affiliate in Denver, has released video from a rally in which the station’s hired security guard is accused of shooting and killing someone after a verbal dispute.

The video, which is from a KUSA producer’s cellphone, depicts the moments before, during and after the shooting, which occurred over the weekend at rallies in downtown Denver. The unlicensed security guard, 30-year-old Matthew Dolloff, is accused of shooting and killing 49-year-old Lee Keltner, who died at a nearby hospital.

The 9News producer stopped filming for 12 seconds, but the station released footage from another individual who was livestreaming the altercation and captured the shooting on tape. The 9News producer begins filming again and captures some of the aftermath, in which Keltner can be seen on the ground as police secure the scene.

“He maced him, he maced him, so that’s when he shot him,” the producer can be heard saying. “That guy just saved my fucking life, you know that, right?”

Kelter was declared dead at a nearby hospital later that afternoon. Dolloff has not been formally charged. He was arrested on suspicion of first-degree murder.

Dolloff was contracted through Pinkerton and was hired as private security to accompany KUSA staff at protests and rallies, which the station says has been common practice. He was not licensed to carry a weapon as a security guard in the state, the Denver Post previously reported.

9News told the Denver Post on Monday that it specifically requests unarmed guards from Pinkerton, the security company that contracted Dolloff.

“9NEWS does not contract directly with individual security personnel. 9NEWS contracted with Pinkerton and had directed that security guards accompanying our personnel not be armed,” Mark Cornetta, president and general manager of the station, said in a statement. “None of 9NEWS’ crew accompanied by Mr. Dolloff on Saturday were aware that he was armed.”