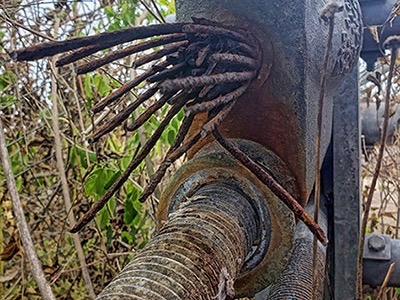 The 998-foot broadcast tower stopped working, which interrupted the station’s signal for some viewers.

At noon Thursday, KRIS was telling viewers of high wind warnings and that it impacted the signal in some areas. At the time of the failure though, winds were only 25 mph with gusts at 43 mph.

“Our engineers are working diligently on the problem and hope to have a resolution soon that will result in the return of our coverage across the area,” the station said in a statement.

But later, the station announced the tower’s collapse caused the signal for additional stations to crumble, including KRIS, CW, KDF, Grit and Court TV.

As it turns out though, winds might not have been to blame.

The website Wireless Estimator says a rusted wire forced the cables to detach from the anchor, which caused the outage.