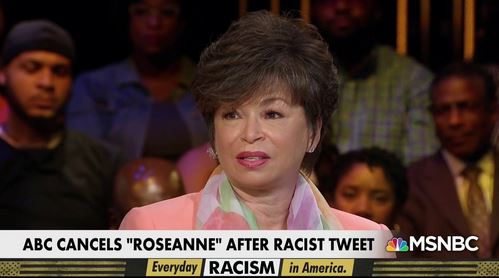 On the same day Roseanne Barr sent an offensive tweet about Valerie Jarrett–and then had her ABC sitcom canceled because of it–Jarrett was booked to appear on an MSNBC town hall called Everyday Racism in America.

That town hall airs tonight at 9 p.m. ET, but MSNBC released a clip of Jarrett reacting to Barr’s now-deleted tweet.

.@ValerieJarrett responds to Roseanne Barr's tweet, saying Disney’s chairman called her before announcing that ABC was canceling the show: "This should be a teaching moment.” #EverydayRacism pic.twitter.com/b0EvA8WAeY