NEXT:Brian Ross Suspended For 'Serious Error' in Reporting
PREVIOUS:Jeff Glor Steps Into Evening News Anchor Chair at a Pivotal Time for the Network 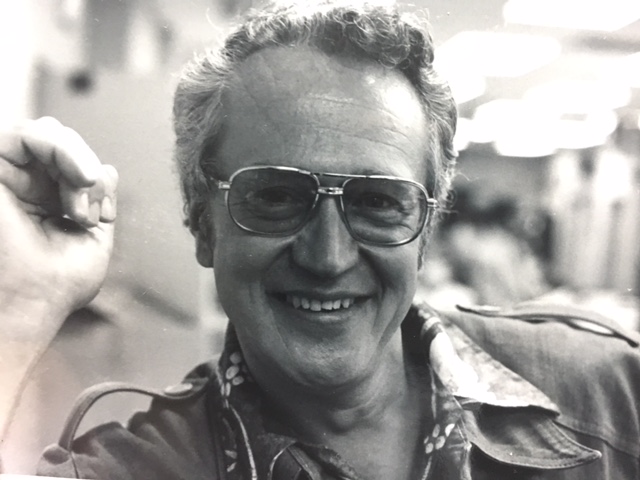 Robert Asman, who rose from NBC page to a producer for David Brinkley, and in between produced some of the most iconic TV news reports of the 1960’s and 70’s, has died. He was 91.

Robert Asman’s son, David Asman, an anchor for Fox Business Network, shared this remembrance of his father for TVNewser readers:

Robert Asman, a true pioneer in television news, died on Friday at 6:10 am, surrounded by his family, in the modest Chevy Chase home he bought in 1961 and has lived in ever since. He bought that home when he was lured to Washington by David Brinkley and his expansion of NBC’s D.C. news bureau after the inauguration of President Kennedy.

But years before that Bob had already made his mark on the nascent medium of television news.

Right out of the Navy at the end of World War II, he completed a two-year broadcasting degree at Columbia University under the G.I. bill. His first job after school was as an NBC guide/page at 30 Rock. It was there that he met his future wife, Nan, who was also an NBC page, and occasional hostess on one of the many early attempts at TV variety in the late ‘40s. They married in 1949 and stayed happily married until his death on Friday.

After working as a radio DJ in northern New York, Bob saw the shifting of the industry away from radio and toward television and began job hunting for TV work in Manhattan. Initially he worked for an independent production company, but he was soon offered a job working as associate producer for Walter Cronkite’s epic series, “The Twentieth Century.”

That show brought TV news into a different, more cinematic light. Each episode focused on a specific event or character of the 20th Century, using tons of footage that might have otherwise dissolved in film libraries around the world. The music was provided by masters like Harold Arlen and Alfredo Antonini, an accolade of Arturo Toscanini. The overall design was that every hour was a moving reflection on news as history. Just the stirring, opening theme song was enough to give you goosebumps.

It was precisely that attempt at capturing history in television news that led David Brinkley to modernize the NBC news bureau. Brinkley saw that the election of JFK and his growing superstar status represented a quantum shift in our political history, one ideally suited for a more entertaining mode of television news. To expand and modernize NBC’s Washington Bureau, Brinkley hired legendary director Ted Yates (killed while covering the 1967 war in the Mideast), writer Stu Schulberg, and my father as producer to start a show called “David Brinkley’s Journal.”

The award-winning show lasted just two years, but Bob’s career at NBC was to last another 35. He pioneered (it’s an overused word, but frankly there is no other) such revolutionary concepts as pool productions, where competing news networks for the first time cooperated in coverage of events. These were particularly helpful in the coverage of the space program, which my father covered from the early Mercury flights, through the Apollo moon missions, up to and including Space Shuttles. Frankly these were his happiest years on the job, though his family wasn’t very happy about all the months he stayed down in Florida and Houston.

But in addition to these special projects, he provided unique, breaking news coverage of all the exciting and tragic moments of the ‘60s and ‘70s. The pinnacle was coverage of President Kennedy’s assassination and its aftermath. I still remember as a young boy the call from the control room, where my dad told my mother to turn on the TV right after Oswald was shot on live television. And I remember another call for him years later that came in the early hours after Robert Kennedy, a man he greatly admired, was shot. 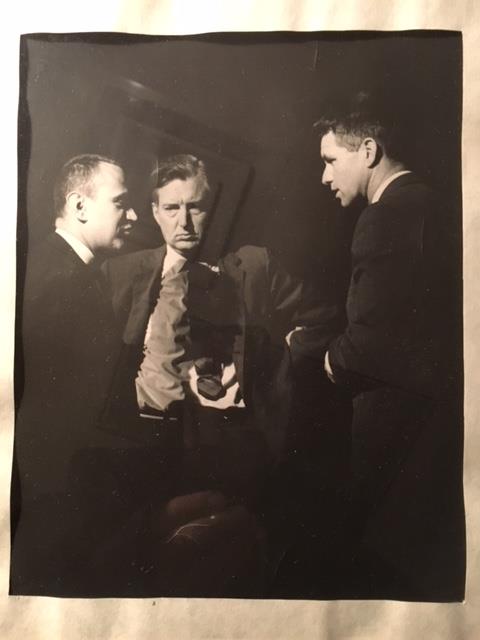 Then in the late ’70s, with the space program losing audience share, and the country growing weary of politics after years of Watergate, Nixon and Jimmy Carter, Bob’s career got a surprising political boost. NBC was producing a quarterly show called “The Loyal Opposition,” which at the time invariably referred to Republicans. My father produced the shows and became about the most knowledgeable producer at NBC dealing with Republicans. He saw in Ronald Reagan something special…something different. And truth be told, something that even he, as a life-long Democrat, thought would transform the country in a positive way.

When Reagan was elected, something that very few people at NBC foresaw, there were few the network could turn to for coverage…except Bob Asman. Through his earlier contacts with Republicans, he saw the Reagan Revolution coming and had all the contacts he needed to give NBC an inside edge. This led not only to eight years of often exclusive interviews and access, but it also led to a strong attachment on the part of both men. They came from the same Depression-era, lower-class backgrounds. They were both grass-roots patriots, who thought the country had lost its way. And they both believed that the country yearned for a new turn toward the greatness that had been its destiny.

And yes, my father later conceded to me that he had become a Reagan Democrat, I think mostly because he just liked Reagan so much. Our home is now filled with pictures of the two men together, from the many shoots in the Oval Office and elsewhere. 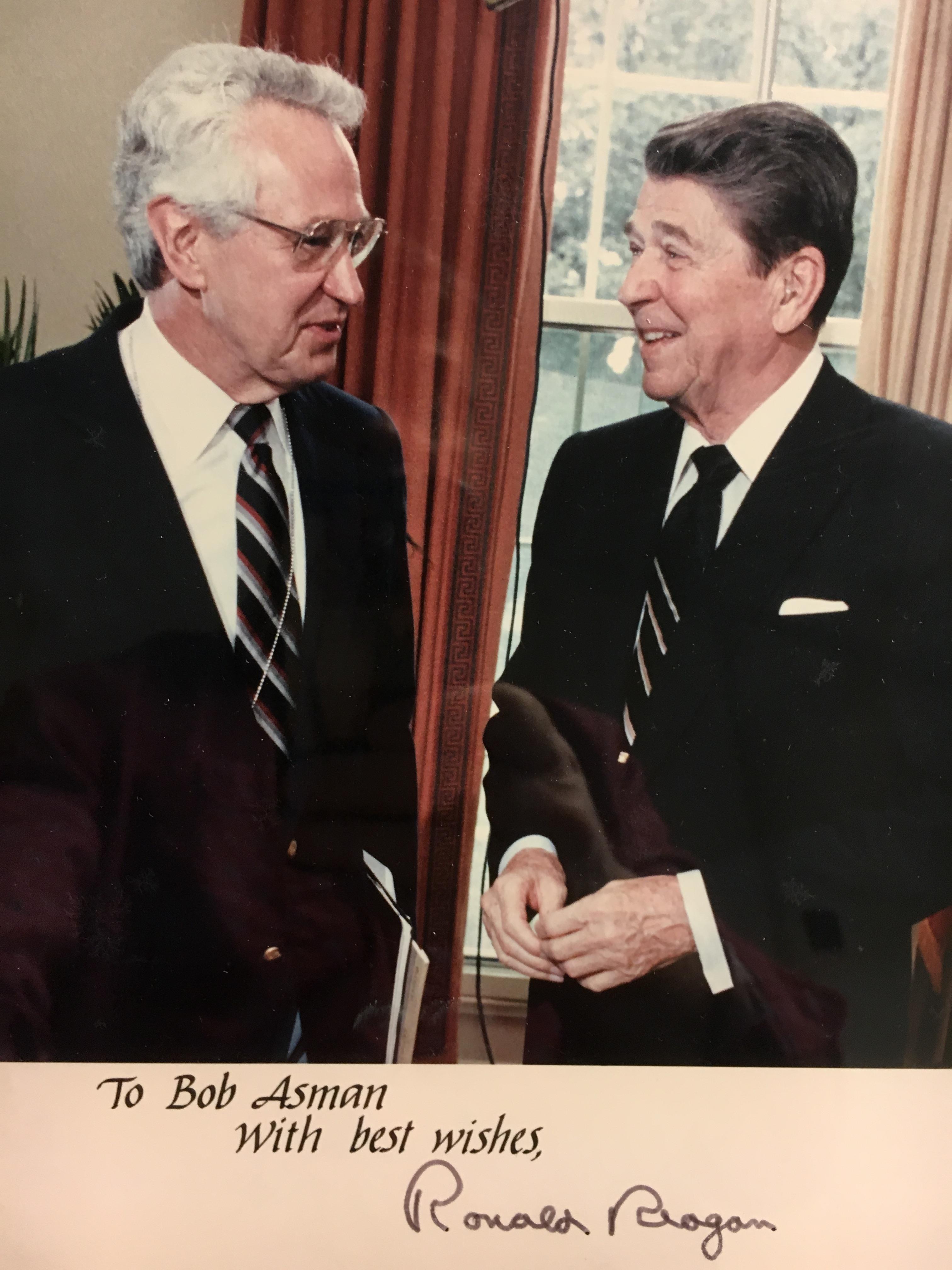 The ‘80s focus on the Reagan Revolution gave Bob status to be the go-to guy for all events political, including Conventions and Presidential debates, where he was often the pool producer. And when he finally retired from NBC in the late ‘90s, he was hired by the League of Women Voters to be their pool producer of debates they hosted.

As with any life there is so much more to say about my dad than his career. But his career really did define him, for good and for bad. I mentioned the time away from home. But anyone in the business who lives with a producer knows well how he doesn’t stop producing when he comes home. It’s challenging to live with someone who just can’t stop producing… anything! 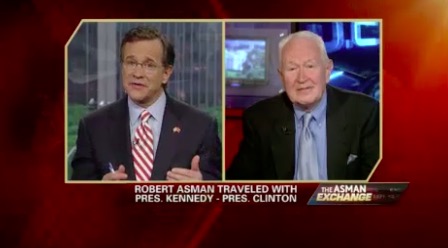 But the good news for all those suffering through the at-home producer syndrome: it’s not indelible. In his retirement years, my dad’s charm and sweetness were his defining characteristics. And as I rather reluctantly took a role in this industry (having remained a print guy for the first half of my career), I began hearing stories about his kindness and generosity at work. Decades ago, I was on stage with the late TV personality Ed Newman. After the forum he came over to me and asked if I was related to Bob Asman. When I told him he was my father, Mr. Newman pulled me aside and spoke to me very deliberately, measuring each word, as if he were dictating a story over the phone. And I made a point of memorizing every word:

“In an industry that often falls short in kindness and promises kept, your father is a rare exception. You should be extremely proud.”

I am and I shall miss him very much.