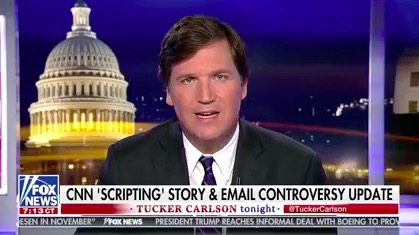 Carlson devoted coverage over two nights of his show last week to the accusation that CNN had scripted a question for a student (which was never asked) during last week’s gun town hall in South Florida.

Well, the AP now reports that Glenn Haab, father of student Colton Haab, admitted today that he omitted several words in an email that made it appear as though CNN was scripting questions.

Colton and his parents sent us their email correspondence with CNN, which seemed to confirm Colton’s claim that his question had been altered by a CNN producer. On Friday, we asked CNN to verify and comment on those emails, because that is our journalistic duty. A short time before air, CNN provided us a different set of emails. We immediately asked the Haabs’ about those. They said they were being slandered by CNN. And that is where it stood. Two sides telling contradictory stories. Without access to their email accounts we can only guess which one was telling the truth and guessing is not enough.

The Haab family concedes that they did remove a line from one of their emails in a way that might make some think its meaning had changed.

Colton’s father said it was accidental. We don’t know. We can’t prove or disprove that. But for the sake of honesty and full disclosure–to which we are committed–we have to tell you there is no evidence as of right now that CNN tried to give Colton Haab a scripted question. And we wanted you to know that.