NEXT:Friday, July 10 Scoreboard: Tucker Carlson Remains No. 1; MSNBC Moves Back Into Second Place in Prime-Time Demo
PREVIOUS:New Day Co-Anchor John Berman Goes Off on Tucker Carlson's Response From Last Night: 'That Was a Sham, That Wasn't an Apology at All' 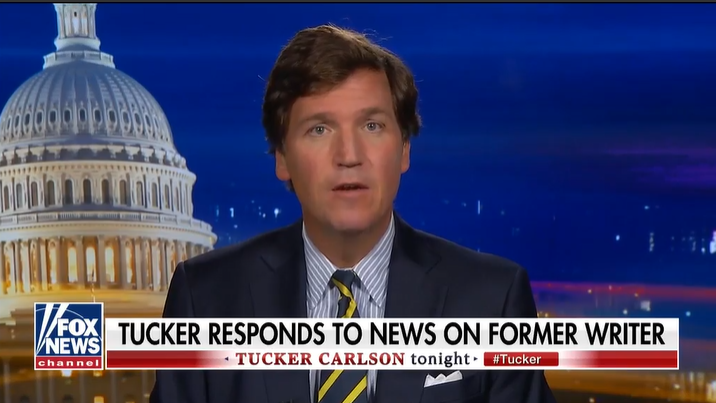 Tucker Carlson waited until around 8:45 p.m. ET of tonight’s broadcast to address the elephant in his studio: the resignation of his former top writer Blake Neff after it was reported by CNN’s Oliver Darcy that Neff was using an online alias to post racist, sexist and homophobic remarks in an online forum named AutoAdmit for many years and as recently as late June.

Neff worked at Fox News for nearly four years and was the top writer for Carlson. Before joining Fox News, he was a reporter at The Daily Caller, a conservative outlet that Carlson co-founded.

“Over the weekend, you may have seen stories about a writer on this show called Blake Neff,” Carlson began. “For years, since he was in college, Blake posted anonymously on an internet message board for law school students. The posts became public. Blake was horrified by the story, he was ashamed. Friday afternoon, he resigned from his job.

“We want to say a couple of things about this,” Carlson added. “First, what Blake wrote anonymously was wrong. We don’t endorse those words. They have no connection to the show. It is wrong to attack people for qualities they cannot control. In this country, we judge people for what they do, not for how they were born. We often say that because we mean it. We will continue to defend that principle, often alone among national news programs, because it is essential. Nothing is more important. Blake fell short of that standard and he has paid a very heavy price for it.”

Carlson went on to take a shot at his critics in the media, saying, “We should also point out to the ghouls now beating their chests in triumph in the destruction of a young man that self-righteousness also has its cost. We are all human. When we pretend we are holy, we are lying. When we pose as blameless in order to hurt other people, we are committing the greatest sin of all, and we will be punished for it. No question.”

Carlson’s monologue lasted roughly one minute. He then teased a story about violence in New York City before going to break.

At the end of the broadcast, Carlson announced that he’s going on a preplanned trout-fishing vacation and will be away for the next four days.

If you think this sounds familiar, Carlson also embarked on what he said was a preplanned fishing vacation last August, after saying earlier that week that white supremacy is “not a real problem in America,” and claimed that it’s a “hoax” being used to divide people.