In a statement below, Fox News CEO Suzanne Scott and president, executive editor Jay Wallace condemn the posts that led to the resignation of Tucker Carlson‘s former top writer, Blake Neff, saying the comments were “deeply offensive, racist, sexist and homophobic.” Carlson will address this on his show Monday. 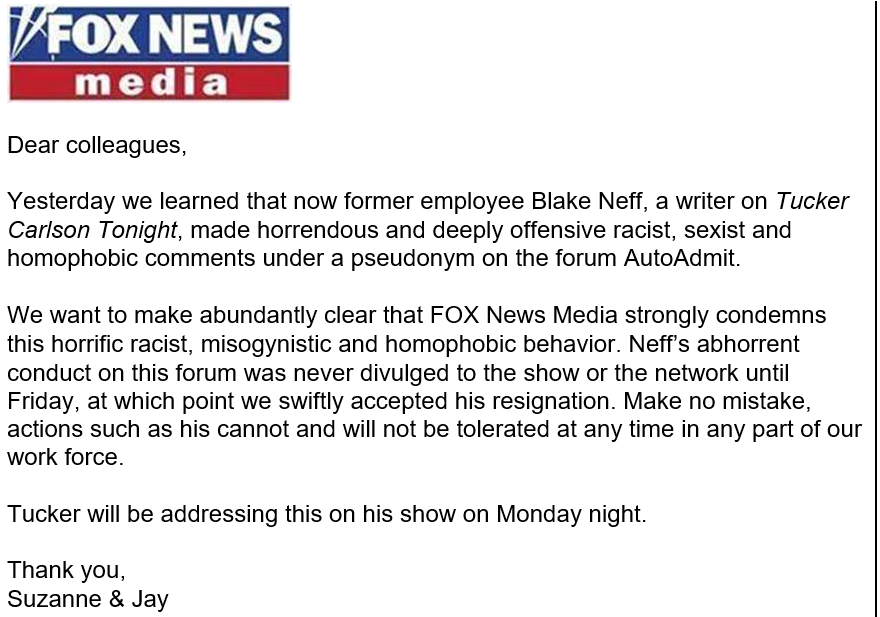 Blake Neff, the top writer for Tucker Carlson has resigned from Fox News Media after it was discovered that he was using an alias to post racist, sexist and homophobic remarks on an online forum named AutoAdmit, which is a hotbed for offensive content.

According to CNN’s Oliver Darcy, who first reported the news, Neff worked at Fox News for nearly four years and was a top writer for Carlson. Before taking a job at Fox News, he was a reporter at The Daily Caller, a conservative outlet that Carlson co-founded.

Over the course of five years, Darcy reports, Neff started a thread on AutoAdmit, where he would post content incessantly mocking the woman, with whom he was friends on Facebook and described as an “Azn megashrew,” sharing posts she had written about her dating life. He has continued to post to the thread and mock the woman, whom CNN will not identify, as recently as late last month.

Through the years, the thread has generated nearly 1,000 comments—many of which used vulgar, racist, sexist and dehumanizing language to mock the woman.

After learning of Neff’s incendiary posts on the online board through an email from an anonymous tipster, Darcy reports that CNN was able to positively identify the alias CharlesXII as Neff by reviewing messages he has posted throughout the years on the forum and matching them with publicly available information about him. For example, in a recent article in the Dartmouth Alumni Magazine, he writes, “Anything [Tucker Carlson is] reading off the teleprompter, the first draft was written by me.” He also acknowledged the show’s influence, telling the magazine, “We’re very aware that we do have that power to sway the conversation, so we try to use it responsibly.”

Darcy writes that just this week, Neff responded to another thread started by another user with the following subject line (NSFW): “Would u let a JET BLACK congo n****er do lasik eye surgery on u for 50% off?”

Neff responded, “I wouldn’t get LASIK from an Asian for free, so no.” (The subject line was not censored on the forum.)

On June 5, Neff wrote, “Black doods staying inside playing Call of Duty is probably one of the biggest factors keeping crime down.”

On June 24, Neff commented, “Honestly given how tired black people always claim to be, maybe the real crisis is their lack of sleep.”

On June 26, Neff wrote that the only people who care about changing the name of the NFL’s Washington Redskins are “white libs and their university-‘educated’ pets.”

Those are just a handful of examples.

This is obviously not a good look for a program which has already had issues keeping advertisers. Brands have been moving their commercials from Tucker Carlson Tonight to other Fox News programming in recent years to avoid being connected to Carlson and incendiary comments about immigration.

However, Carlson’s 8 p.m. Fox News show has a very devoted fan base (including the president), and last quarter, the show earned the largest average audience in cable news history. Not only that, but there have been occasions lately where Tucker Carlson Tonight has even been the most-watched television program on all of prime-time television, across both broadcast and cable.

During tonight’s broadcast of Tucker Carlson Tonight, the host went after CNN (perhaps in light of its story) while talking about “cancel culture.” He said, “We are in a situation where t’s with individuals against the mob—online, other news organizations, CNN particularly. How can people stand up to the mob and prevail?”

Carlson will address the situation during the Monday, July 13 broadcast.