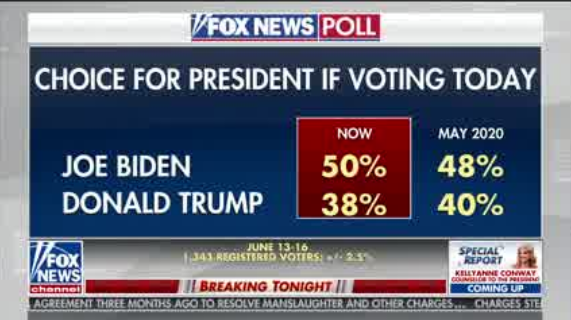 As one might expect, Trump wasn’t happy about it.

.@FoxNews is out with another of their phony polls, done by the same group of haters that got it even more wrong in 2016. Watch what happens in November. Fox is terrible!

Nate Silver’s FiveThirtyEight operation rates Fox News as an A- pollster. In fact, we published a story in September 2019 with the headline: The Fox News Polling Operation Is Respected by the Experts, and Loathed by President Trump.

Last Wednesday, the Trump campaign sent a “cease and desist” letter to CNN Worldwide president Jeff Zucker after the network released a poll showing the former vice president leading President Trump by 14 points nationally (55-41% among registered voters). As expected, the letter was immediately rejected by the network. It remains to be seen whether the campaign sends a similar letter to Fox News.