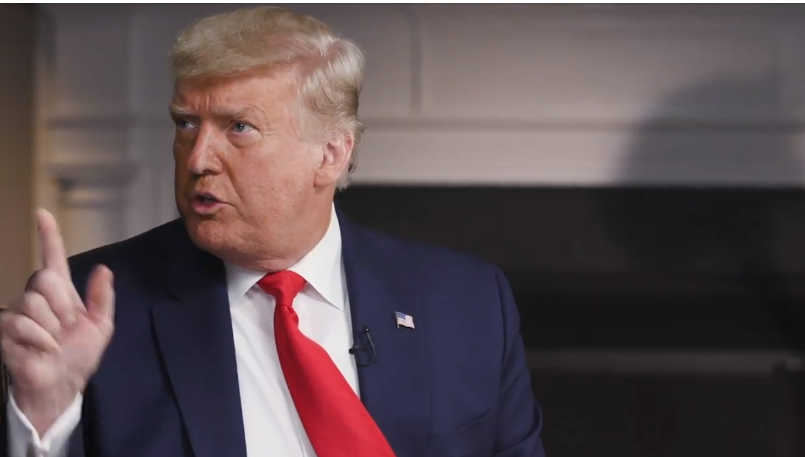 So much for the White House’s agreement with 60 Minutes that it would tape CBS’ interview “for archival purposes only.”

The president followed through on his threat to release the raw tape of his interview with 60 Minutes correspondent Lesley Stahl, doing so via his Facebook page at around 11:30 a.m. ET on Thursday.

The tape runs for nearly 38 minutes.

When Stahl asks Trump what his biggest domestic/national priority is, he talks about the prepandemic economy and claims he saved millions of lives with his actions during the pandemic. He also claims record job creation.

Stahl also asks Trump three different times to say that his priority is “getting back to normal.”

Stahl notes that it’s up to Americans to see for themselves that it’s not true the country “has turned the corner,” and the coronavirus is “disappearing.”

Trump responds by saying, “That’s right, we have turned the corner.”

The president starts to become frustrated when Stahl presses him about Covid-19 cases going up. He then claims that the cases are going up “because we’re doing more testing.”

Stahl doesn’t seem to be satisfied with this claim, and she continues to press him. Needless to say, Trump doesn’t like what she’s doing.

“You said the other day to suburban women, ‘Will you please like me?'” Stahl said. Trump quickly responded: “Oh, I didn’t say that … that’s so misleading the way—I say jokingly, ‘Suburban women, you should love me.'”

Stahl pushes back against Trump’s claims consistently, but she isn’t necessarily raising her voice or being particularly combative.

“You called Dr. Fauci and other health officials idiots,” Stahl asks. Trump responds, “Dr. Fauci—where did I call him an idiot? Where?” (For the record: Multiple reports say Trump said on a campaign call on Monday, “People are tired of hearing Fauci and these idiots, all these idiots who got it wrong.”)

Later in the interview, Stahl told Trump that he used to have bigger rallies. He responded, “These are the biggest rallies we’ve ever had.”

TVNewser previously heard Trump decided to end the interview for a number of reasons, including Stahl’s refusal to play ball on the Hunter Biden saga that has gotten a lot of coverage on right-leaning media outlets. “This is 60 Minutes, and we can’t put on things we can’t verify,” Stahl said.

We also heard he was displeased with persistent questioning about mask-wearing at his rallies (or lack thereof). Trump said, “A lot of people are wearing masks” at the rallies. Stahl pointed out that most people aren’t.

He also didn’t like how Stahl opened their conversation by asking if he “was ready for tough questions,” and he ended the interview not long after someone off camera informed Stahl that the vp would be joining the interview in a few minutes.

UPDATE: CBS News put out the following statement in light of Trump’s decision to post the interview tape:

“The White House’s unprecedented decision to disregard their agreement with CBS News and release their footage will not deter 60 Minutes from providing its full, fair and contextual reporting which presidents have participated in for decades. 60 Minutes, the most-watched news program on television, is widely respected for bringing its hallmark fairness, deep reporting and informative context to viewers each week.  Few journalists have the presidential interview experience Lesley Stahl has delivered over her decades as one of the premier correspondents in America and we look forward to audiences seeing her third interview with President Trump and subsequent interview with Vice President Pence this weekend.”