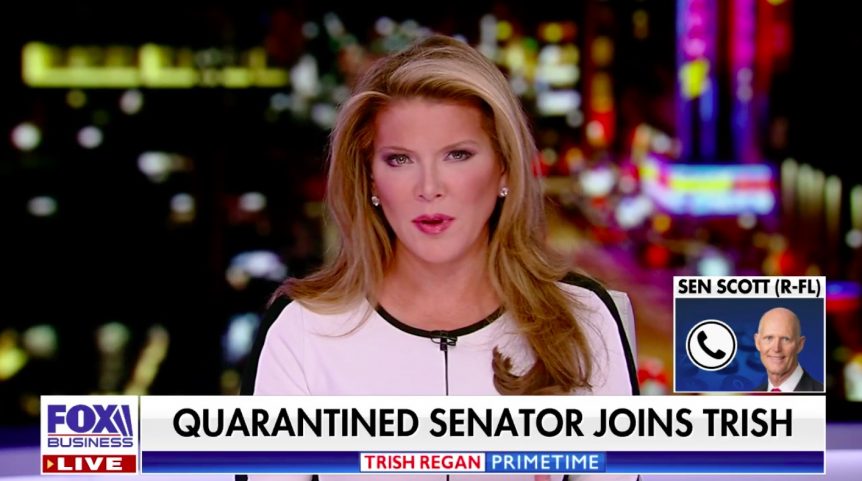 The indefinite schedule change follows comments Regan made on her show Monday that the reaction and coverage of the coronavirus was “yet another attempt to impeach the President.”

Trish Regan Primetime is “on hiatus until further notice,” an FBN spokesperson said in a statement shared with TVNewser. The New York Times first reported the news late last night.

But it’s not just Regan’s 8 p.m. ET show, but Kennedy, which airs at 9 p.m. is also being shelved. Both shows will be replaced with long form programming.

“Due to the demands of the evolving pandemic crisis coverage, we are deploying all resources from both shows for staffing needs during critical market hours,” the network said.

This past week saw record trading highs and lows. Thursday’s drop was the worst since “Black Monday” in 1987. Friday’s recovery saw the biggest one-day gain since October 2008.

In his Thursday newsletter CNN’s Brian Stelter heard from an anonymous Fox producer who said Fox hosts were being “irresponsible” in some of their coronavirus commentary. “The attempt to deflect and blame the media and Democrats from Trish Regan, Sean Hannity, Laura Ingraham, Lou Dobbs, Jesse Watters, and Greg Gutfeld is really irresponsible and hazardous to our viewers.”

Earlier Thursday, Fox News CEO Suzanne Scott and executive editor Jay Wallace sent a note to staff announcing what the network was doing to protect its own employees, including cancelling meetings and reducing in-studio bookings and using Skype or other remote methods instead.

“Please keep in mind that viewers rely on us to stay informed during a crisis of this magnitude and we are providing an important public service to our audience,” the email read.