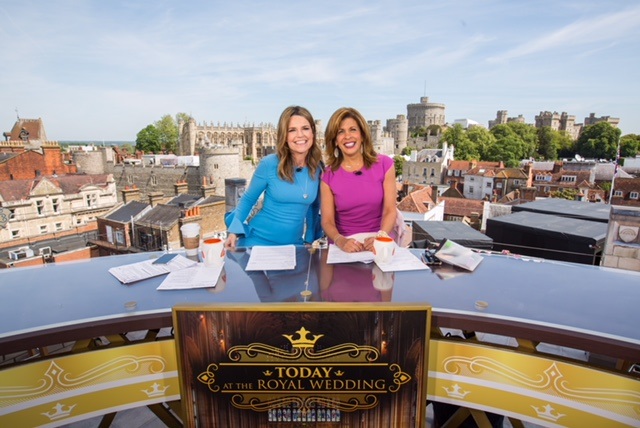 NBC News’s decision to send all of its morning show anchors to Windsor to cover the Royal Wedding of Prince Harry and Meghan Markle (now Duke and Duchess of Sussex) ended up being a lot of money well spent, because Today was able to snag the morning show ratings crown last week across all audience demos.

This victory was propelled by large audiences on Friday and particularly on Royal Wedding Saturday, where Today was America’s go-to network for live coverage of the event. The live coverage was anchored by Savannah Guthrie and Hoda Kotb, and they were joined by Al Roker, Megyn Kelly, Kathie Lee Gifford, and Sheinelle Jones.

In addition to winning the week of May 14 among total viewers (+2,000), Today has been the No. 1 morning show in A25-54 for 125 straight weeks, while delivering its best total viewers margin vs. ABC in 12 weeks, and its highest total viewer average in 10 weeks.

Compared to the same week last year, Today was +2 percent in total viewers, but it was down in the key demo by -5 percent, per Nielsen data.

ABC’s Good Morning America slipped to second place last week across all categories. It was also -1 percent in total viewers and -4 percent in the demo versus last year. That said, GMA is poised to win May sweeps period among total viewers for the 6th consecutive year (the final May sweep numbers will be out next week).

CBS This Morning was -6 percent in total viewers, and -9 percent in the demo from last year.

The averages for the week of May 14: